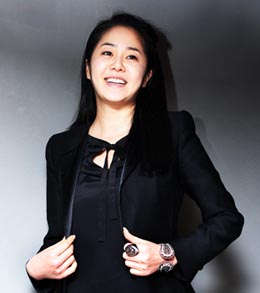 Ko Hyeon-jeong is enjoying a renaissance in her career, winning critical acclaim for her work this year. [YONHAP]

For actress Ko Hyeon-jeong, the year 2009 will be remembered as the busiest, yet most rewarding of her career, as she has been recognized for her powerful acting skills on both the small and big screens.

Ko also won acclaim for her role in the movie “Like You Know It All” directed by Hong Sang-soo. It was her second collaboration with the director after the 2006 movie “Woman on the Beach.”

She left acting in 1995 when she got married to current Shinsegae Group CEO Chung Yong-jin. She returned to acting 10 years later following a very public divorce.

A scene from the movie “The Actresses” featuring six screen beauties. Provided by Sponge Ent.

Ko is now set to make a splash with her role in the movie “The Actresses,” which opens in local theaters today.

The movie follows six actresses who come together for a Vogue magazine photo shoot on Christmas Eve. It features six high-profile actresses - Yoon Yeo-jeong, Lee Mi-sook, Choi Ji-woo, Kim Min-hee, Kim Ok-vin and Ko - and shows the range of emotions they go through as they deal with having to share the spotlight.

In the movie, each actress plays herself, revealing hidden anxieties and ambitions as the movie progresses. But the actresses walk a fine line between reality and fantasy, making viewers wonder whether they are acting or sharing something of their true selves. The movie is shot like a reality show and uses improvised dialogue and scenes, and the plot draws on the actresses’ real lives, while also mixing in elements of fiction.

In one scene, Ko, who plays a divorcee dating a younger man in the movie, picks a fight with actress Choi Ji-woo and speaks her mind about what it is like to live as a divorcee.

Ko’s real-life experience as a divorcee informed her on screen role.

Following are excerpts from a recent interview with her.

Q. How did you come to participate in this film?

A.The film is in fact the result of a conversation I had with director E J-yong, who is a friend of mine. He once told me that he didn’t understand why actresses cannot bond like their male counterparts, who do so by way of things like participating in a baseball team, to which I replied, “No, we girls also get together,” and that’s how it all began. I actually have a lot in common with the character in that I also have a temper.

Who wrote the script?

There was an original screenplay by the director, but we [the actresses] shaped each character by adding our own thoughts and anecdotes. For instance, there is a scene in which the senior Lee Mi-sook says to my character, who is about to get a divorce, “You should’ve said what you needed to say [during your marriage].” That was actually something she said to me.

Viewers are likely to connect the character you play with the real you. What do you think about that?

The bottom line is that this is fiction. However, it would be a lie to say that I feel no pressure at all [about playing myself] because the movie captures us in such private moments. Also, no matter how much I try to beautify myself in the movie, some people will still find bad things about me and some will still misunderstand me, judging me just by what they see in the movie.

The director has likened the movie to jazz, which is characterized by improvisation.

During shooting we were asked to act as if we were in a play. The movie is set in a dressing room with mirrors all around and we had five or six cameras rolling at the same time - placed so they wouldn’t be seen - meaning we had to work together so that we wouldn’t ruin the sequences. Since shooting that way would have been impossible without cooperation among us, we didn’t have the space or time to get in each other’s way, as people are likely to imagine. (Laughs.)

The Actresses, which is now playing at local theaters, recently received an invitation to the 60th Berlin Film Festival to be held next February.