In search of the rising sun

In search of the rising sun 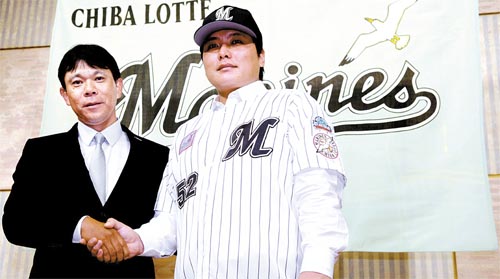 The ear-to-ear grins that Kim Tae-kyun and Lee Bum-ho sported during their respective press conferences several weeks ago said it all.

Kim showed his pearly whites when talking to reporters on Nov. 13 about his new three-year, 700 million yen (9 billion won, $7.8 million) contract with the Chiba Lotte Marines of Nippon Professional Baseball - a major coup for the first baseman from the Hanwha Eagles.

His former teammate Lee Bum-ho followed suit the very next week, signing a mega deal of his own worth 500 million yen with the SoftBank Hawks of the Japanese league. 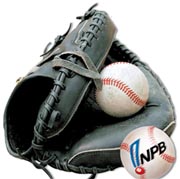 The two players are making further inroads for Korea Baseball Organization players in Japan in much the same way Haitai Tigers teammates Seon Dong-ryeol and Lee Jong-beom did in the mid-1990s when they signed with the Chunichi Dragons. The NPB league not only represents a bigger market where players can get higher compensation, it also serves as a better competitive ground given its high level of talent.

With Korea’s strong showing at the World Baseball Classics in recent years and the 2008 Beijing Olympics, an increasing number of NPB teams are taking an interest in local players, raising the sport’s stature here, creating new opportunities for athletes on a larger stage and changing the baseball landscape in Korea.

“Up until the 1990s, people in Japanese baseball circles looked at Korean baseball as a notch lower,” explained one NPB official. “All that has changed. Most notably, Korean free agents are now targeted by NPB teams. If Korean players do not strike a lucrative deal here, they have a high chance of signing on with an NPB club nowadays.” 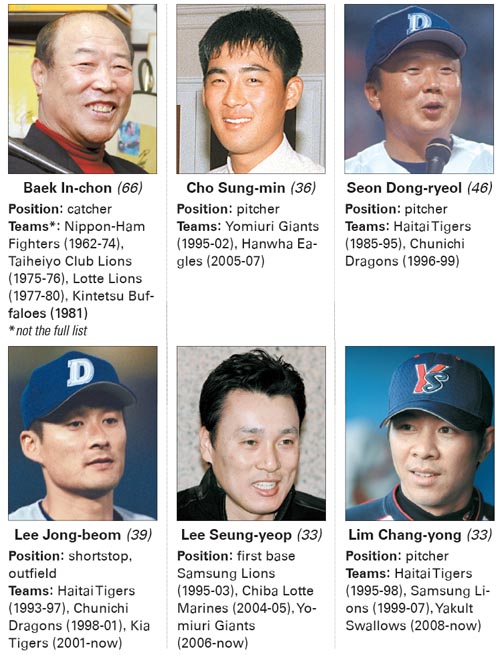 Many older Korean players grew up with the goal of playing for an NPB team, which until recently was largely nothing more than a far-fetched dream.

Current Yomiuri Giant Lee Seung-yeop, 33, was one of them. During his middle school days in Daegu, he hung large black-and-white photo of Yomiuri great Sadaharu Oh or Wang Chengchi in his school baseball team’s dorm. Wang, born to a Chinese father and a Japanese mother, dominated Nippon Professional Baseball during the 1960s and 70s, amassing a total of 868 home runs in his career - which still stands today as a league record.

In 2003, Lee hit 56 home runs for the Samsung Lions, his hometown team, setting a new record for Asian professional baseball leagues. After the season, the Lions offered him a four-year contract extension worth 1 billion won. But the Chiba Lotte Marines of NPB came calling with a two-year deal worth the same amount. Lee jumped at the chance to play in Japan, going on to hit 44 home runs and 132 RBI with a batting average of .250 in two seasons. He then signed a lucrative four-year deal with the Yomiuri Giants worth 300 million yen in 2006.

Current Kia Tigers outfielder Lee Jong-beom had similar goals growing up. As a child, Lee watched a movie about Korean-Japanese baseball player Jang Hoon. It left a lasting impression on him.

“Jang was the first player in NPB history to amass 3,000 hits. I wondered if I could become a player of Jang’s caliber, but at the time it was a monumental goal,” Lee said.

After a successful collegiate career at Kunkuk University, Lee was drafted first overall by the Haitai Tigers in 1993 and made an immediate impact. The speedy shortstop had a successful five-year stretch with the Tigers and then signed with the Chunichi Dragons in 1998. Lee’s stay with the Dragons, however, did not pan out in the long run after an injury in which he was hit in the right elbow by a pitch.

Up until the 1990s, it wasn’t easy for players to sign with a professional club outside of Korea. The KBO lacked rules on such moves, and players here simply weren’t in demand internationally.

Everything changed in the mid-1990s when Haitai, a large confectionery and food firm that sponsored a team, experienced financial difficulties.

To help ease expenses and raise some much-needed cash, Haitai sent two of its biggest stars to the NPB league. The company gave the Chunichi Dragons the rights to sign pitcher Seon in 1996 for 500 million yen. Haitai’s Lee Jong-beom followed Seon in 1998, receiving an 80 million yen signing bonus with a guarantee of another 80 million yen in annual salary. In return, Haiti received 450 million yen from Chunichi for the rights to sign Lee. With two of its biggest stars signing on with overseas clubs, the KBO adopted a free agency system in 2000.

In all, a dozen Korean players have made the jump to the NPB league. Baek In-chon was the first to do so, joining a Japanese team in 1962. Although Baek would go on to have a long and distinguished career in the NPB league with three teams, it would take more than three decades for the next Korean player to follow his footsteps.

That person was pitcher Cho Sung-min, considered the top pitching prospect of his generation. Cho signed with the Yomiuri Giants upon graduating from Korea University in 1995. Although Cho showed promise early on in his career, he never quite recovered from an elbow injury suffered during the 1998 season. Seon made the move to the Japanese league a few months after Cho and had a successful stint with the Dragons, posting 10 wins, four losses, 98 saves and a 2.70 ERA over four seasons.

Seon’s success helped several other Korean players make the jump to the league in the next six years, although injuries and poor play curbed the NPB’s interest for a bit.

Lim Chang-yong took a more distinct route to Japan. The right-handed relief pitcher was considered washed up after Tommy John surgery in 2005. Two years later, the Yakult Swallows took a chance and signed Lim for $300,000. Lim took a pay cut from what he was making with the Samsung Lions, but the gamble paid off. He notched 33 saves with the Swallows last season and established himself as one of the most dominant closers in the league. Lim has drawn interest from other NPB and even some Major League Baseball teams. While he is set to earn 100 million yen in the final year of his contract with the Swallows, Lim can expect to ink a deal that will pay him somewhere in the neighborhood of what Lee Seung-yeop is making with the Giants.

Part of the reason for the low level of crossover in the past was tied to the fact that the KBO didn’t have a free agency system. Under the plan instituted in 2000, players who have fulfilled seven years in the KBO can be eligible to become a restricted free agent. Players who have been with the league for nine years attain full free agent status and are relieved of obligations to their clubs.

In the ensuing years after the new rules were implemented, NPB clubs initially had to pay a fee to the KBO, as was the case when Jung Min-chul of the Hanwha Eagles signed with the Yomiuri Giants in 2000, Jung Min-tae of the Hyundai Unicorns signed with Yomiuri in 2001 and Koo Dae-sung of Hanwha signed with the Orix Buffaloes the same year. However, in recent deals NPB teams merely reached a contract agreement with the players themselves.

While there are plenty of benefits for individual players, some people in Korean baseball circles are worried that the KBO could essentially become the NPB’s minor league system, where players spend their formative years here and then jump ship when they get better. Furthermore, There’s also concern that the departure of good KBO players weakens the league in general, taking away talent that can make everyone better.

Others shrug aside such suggestions, saying that individual players actually can become much better when they move to a more competitive league.

“If a hitter like Kim Tae-kyun remained in Korea, he would produce unbelievable numbers,” said Lee Jong-beom. “That’s because there aren’t pitchers in the KBO who can test him. However, Kim will continue to develop his game by facing tougher competition in Japan.”

The NPB has gotten a taste of its own medicine over the past decade. Ichiro Suzuki left the Orix Buffaloes for the Seattle Mariners of the MLB in 2001, while Hideki Matsui signed on with the New York Yankees two years later. As a result, some of the NPB’s best players have taken a similar route.

It’s hard, after all, to convince players to ignore better opportunities.

“Times have changed,” said Kim Ki-tae, a former KBO star who went on to serve as a coach for the Yomiuri Giants and returned to Korea this year for a managerial position with the LG Twins’ minor league squad. “Who would have thought back in my playing days that I would one day coach baseball in Japan?”