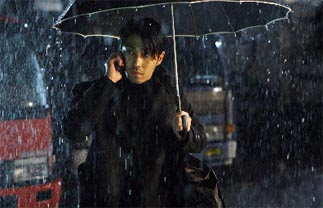 Cha Seung-won plays Kim Seong-yeol, a detective with as much to hide as he has to solve in “Secret.” Provided by CJ Entertainment

Since the release of “The Departed” in 2006, it’s hard to imagine that any Hollywood screenwriter or studio executive has watched a high-profile or high-quality film from East Asia and wondered how they could repackage it for American consumers.

The Departed, of course, was a remake of the 2002 Hong Kong film “Infernal Affairs,” and wound up being quite a piece of cinema in its own right, garnering Academy Awards for Best Picture, Best Director and Best Adapted Screenplay. (You have to wonder how the makers of the original felt about that last award, in particular.)

So while watching “Secret” - a stylish thriller with corrupt Seoul cops, a disintegrating marriage and a complex story line that unfolds nicely, if not altogether neatly - I couldn’t shake the thought that it’s only a matter of time before Brett Ratner would be directing Colin Farrell and Jennifer Garner in a version of this film set in New York and Chicago.

Secret’s star is Cha Seung-won, who plays homicide detective Kim Seong-yeol, a man with plenty to hide. A year before the film takes place, his daughter was killed in a car accident. Kim had been drunk behind the wheel, and speaking on a mobile phone - to his mistress, no less, with whom he had just finished, uh, liaising.

His wife, Ji-yeon, played by Song Yoon-ah, is in the dark about the details and has been distant ever since. One night she comes home looking even less with-it than normal, and has bloodstains on her shirt. Moments later, Kim is called to a murder scene where more than a few pieces of evidence suggest that Ji-yeon had just been there.

From the outset, Kim dutifully covers up evidence, keeps witnesses quiet and pushes canards to keep his wife safe. Unfortunately, it turns out that the victim was the brother of a powerful and pernicious organized crime boss out for blood, Jae-kal (Ryu Seung-ryong). Meanwhile, Ji-yeon refuses to answer any of Kim’s questions about the night of the murder.

Further adding to Kim’s problems is the return of his former partner, Detective Choi (Park Won-sang), back from a suspension after Kim had ratted him out for the murder of a suspect.

Everything that plays out ought to keep audiences trailing behind by a few yards but firmly on the hook, although by the end you’ll wish you could look at the shooting script to sort out some time-line issues.

The cast do a uniformly fine job of playing straight-outta-Gangnam good-looking and sullen, but standing out from the rest is Ryu as Jae-kal the mobster, who is having enough fun busting heads that his delight ought to rub off on the viewer.

Secret was written and directed by Yoon Jae-gu, a first-time director whose previous effort was the screenplay for the 2007 film thriller “Seven Days,” a word-of-mouth hit that year.

Guess what? Within weeks of its release here, the rights to remake Seven Days had been sold to Summit Entertainment, the Hollywood studio behind “The Twilight Saga.” It appears, however, that nothing ever got off the ground. Luckily for Yoon, he’s probably still on the radar of a studio that’s going to have a billion dollars of walking-around money to spend on remakes.