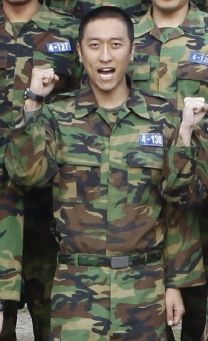 The 28-year-old rapper Bbaek-ga, part of the dance and hip-hop group Koyote, was recently diagnosed with a brain tumor while serving his mandatory military service. Bbaek-ga, whose real name is Baek Sung-hyun, started his service in October as a public servant at the Seoul Central District Court but is currently on sick leave awaiting surgery. Whether or not the pop star will receive an exemption from fulfilling the full two years of mandatory service has yet to be determined, as it appears likely he may have to undergo additional care after surgery.

A spokesperson for the rapper said, "Bbaek-ga was already suffering from migraines and often fainted before he entered military service, but to avoid any suspicion that he might be seeking an exemption, he put off check-ups until now."

Baek received the news three weeks ago during a visit to the hospital after a minor automobile accident. He was reportedly afraid to disclose the diagnosis to his family, but after the news leaked to the media on Wednesday, he left a message thanking his friends and family for their support on his personal Cyworld homepage.

Bbaek-ga joined Koyote in 2004 for its sixth album and has been with them ever since.