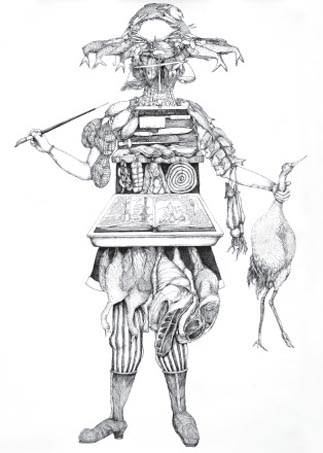 Artist Dabal Kim is known for imbuing her works with fragments of her consciousness and memory. Her art is full of surrealistic metaphors that can at once be viewed as modern sarcasm or as portrayals of her dreams.

Her exhibition, “The Passage of Self-Portrait,” which is showing at the Samtoh Gallery through Dec. 30, highlights the mythical aspects of her creations while also showcasing her continuing work with unconventional materials.

Kim has long used leather objects as canvases, placing her paintings on shoes, bags and other everyday materials. This year, she also started painting on animal skeletons.

Kim traveled to the Gobi Desert in Mongolia in September as one of 10 artists participating in the 2009 International Desert Art Project. The project is a triennial event that began in 2006 in Las Vegas to bring art into new settings. 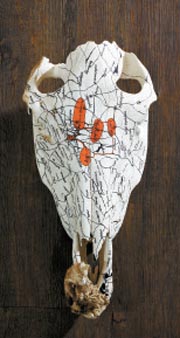 “The Passage I” (2009)Ink pen on the skeleton of a horse. Provided by the gallery

While in the desert, Kim became fascinated by the skeletons she found and she began drawing on them. When she returned to Korea, she brought the pieces with her, and they are part of this exhibit.

“I was inspired by all the skeletons lying around the Gobi Desert and started drawing on them with an ink pen,” Kim said.

“The Passage I,” one of the 32 works in the exhibition, is a piece drawn on the skeleton of a horse with an ink pen.

“As soon as I found the skeleton, I started drawing on it and I finished it when I got back to Korea,” Kim said, explaining how the piece was created. “It’s always exciting to get inspired in such an exotic place,” Kim added.

Kim chose “Self-Portrait,” which depicts a knight from medieval times holding the neck of a goose in one hand and a brush in the other, as her favorite among the pieces on display. “It took me six straight months to finish this piece,” Kim said.

Lee Jong-ho, director of the Samtoh Gallery, said, “the work expresses Kim’s own psychological pressure implicated in her subjective experience.”

Kim’s extremely detailed narrative illustrations are often inscribed within the contours of a human body. They can be read like cartoons - up and down or right to left. “The Sequence of the Dream” is an ink pen on paper piece depicting the back of a female body.

Many of the works in the exhibit are done in ink. Kim said she was fond of the medium because it “gives a different feeling compared to other materials. It’s more detailed.”