Slopes call as winter rolls in

Slopes call as winter rolls in 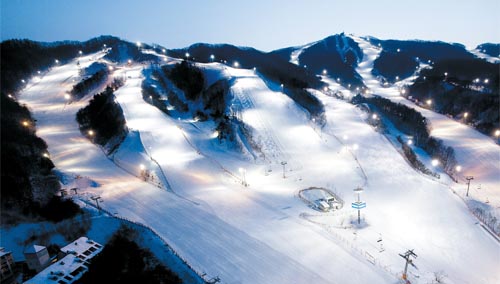 Phoenix Park is popular by day, but it also offers night skiing. The resort has 21 ski slopes and a sledding hill. The longest run, Sparrow Course, stretches 2.4 kilometers. Provided by the resort


The snow has started to fall in Korea, which means one thing for those who revel in powder: Ski season is back. Soaring down mountain slopes is the classic winter thrill, as athletes and amateurs flock to resorts covered in silvery snow. With the first snowfall of the year coming to Gangwon Province in early November this year, ski resorts in the region are now fully open for the season.

This winter is expected to be cold with lots of snow, so resorts that struggled last year due to unusually high temperatures and a shortage of the white stuff are working overtime to make up for it in 2009, with pop concerts, nighttime skiing and gift packages to attract tourists, especially those from Southeast Asia, which represents a growing market.

After two failed attempts to host the Winter Olympics, Korea is making its third bid by gunning for the 2018 Winter Games, and locals are as passionate about the season’s sports as ever.

The history of skiing in Korea goes back some 70 years to the Hamgyong provinces in what is now North Korea. The sport became popular with the opening of the Alps Resort in Ganseong-eup, Goseong County, Gangwon Province, in the early 1970s. Currently, there are 16 ski resorts in South Korea, with the number of fans of skiing and snowboarding rising annually.

Those craving a world-class experience should try Yongpyong Ski Resort in Pyeongchang County, Gangwon Province, which is once again trying to host the Winter Olympic Games. Nearby Phoenix Park ski resort is known for its spectacular scenery. You can reach High1 Resort in Jeongseon County, Gangwon Province by train, and if you want to stay closer to Seoul then Konjiam Resort in Gwangju County, Gyeonggi Province is the way to go. 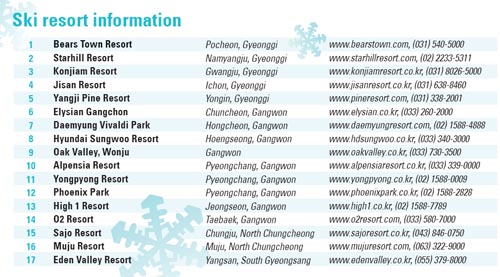 This year, High1 Resort is introducing a special promotion exclusively for female skiers called “Women’s Paradise,” which includes special entertainment, events and food just for ladies. This strategy is part of High1’s attempt to become the hottest resort in town.

A D-10 season pass allows unlimited entry throughout the ski season, and it’s 50 percent off for women - just 175,000 won ($152). Staff members dress up and entertain skiers waiting to board the gondolas with magic shows, pop quiz games and raffles. High1 is also the only ski resort in Korea that can be reached by train. Exclusive service for skiers operates to Gohan Station from Seoul Station, Busan Station and Masan Station.

(www.yongpyong.co.kr)
Korea is now in the midst of its third attempt to win the Winter Olympics, this time in 2018, and Yongpyong Resort is always the first to be featured in the presentation to International Olympic Committee member countries. Three World Cup Ski Competitions have been held here, and the resort hosted the Winter Asian Games in 1999 with great success. The country’s largest ski resort offers 23 slopes and accommodations to fit every budget, from a five-star hotel to a youth hostel.

The resort is planning several special events to celebrate its 35th anniversary. Until February 2010, 350 visitors will be selected every month to receive gifts that include skis, snowboards, season passes, free nights at one of the resort’s hotels, iPods and Nintendo game consoles. Every day, the resort picks a set of four numbers, and if those digits match the last four in your telephone number, you’ll receive a weekly lift pass, a 35,000 won value, for free.

The international standard-size half pipe located under the Silver Slope is the first one in Korea equipped with a conveyor belt for the convenience of snowboarders. The Red Slope features a mogul terrain with bumps, letting skiers try freestyle turns and jumps.

Pyeongchang County is notorious for its cold winters, and walleye pollack is a famous delicacy of the region. Some restaurants in Hwenggye-ri clustered near the entrance to the resort specialize in the fish, offering special dishes. Hwangtae Hoegwan (033-335-5795) is famous for its savory grilled pollack. The 10,000 won dish is accompanied by a bowl of pollack soup, a favorite winter hangover cure. Nabjak Diner (033-335-5477), located next to the Saemaeul Bank in town, is famous for its osam bulgogi, a combination barbecue platter of cuttlefish and pork belly. One portion is 7,000 won. 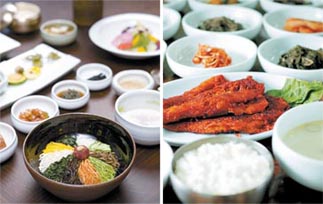 (www.konjiamresort.co.kr)
Opened last year, Konjiam Resort is the first in Korea to limit the number of skiers on the slopes at one time. Four kilometers off the Konjiam Interchange on Jungbu Highway, the resort can be reached in 40 minutes from Gangnam District, Seoul, and skiers can come out at night on the weekdays as well. The resort has 11 slopes and a 476-room hotel with a spa and outdoor hot spring.

Konjiam’s 365 acres of slopes have a difference in elevation of 330 meters and are 100 meters wide on average, and the resort compares favorably with those of Gangwon Province. The longest slope is 1.8 kilometers. The resort removed the half pipe to accommodate novice and intermediate skiers, and there’s even a sledding hill for adults and children close to the ski school, making it more accessible to visitors.

At the foot of the slope, La Grotta is a popular option, featuring a restaurant and a wine cellar in a cave with 10,000 bottles. Tasting sessions go along with fine cuisine at La Grotta’s 72-seat Italian restaurant.

The creamy pasta with clams and arugula and steak grilled on a hot stone plate are popular choices. Wine selections start at 30,000 won.

Phoenix Park is a snowboarding mecca in Korea, featuring extreme sports facilities such as triple jump platforms as well as basic snowboarding fixtures such as rails and boxes, among others.

The 2.4-kilometer Sparrow Course, which begins at the top of Mount Taegi and reaches the base of the mountain via the Panorama Course, is the perfect choice for novice skiers to enjoy the spectacular scenery.

Last year visitors had to buy separate lift and gondola tickets, but this season combination passes are available, offering a savings of 1,000 won to 4,000 won. 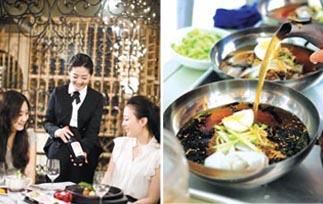 Six incumbent national team skiers are on hand to teach and demonstrate their skills, and a “one point” clinic for adults and students is offered on weekends.

Bongpyeong in Pyeongchang County, Gangwon Province is the birthplace of Lee Hyo-seok, a writer well known for his short stories about his hometown, most notably “When the Buckwheat Flowers Bloom.” It’s also a great spot for some good eats.

The Hyoseok Cultural Village in Bongpyeong is 10 minutes away by car from Phoenix Park, and there are many restaurants specializing in buckwheat noodles. Jinmi Restaurant (033-335-0242) and Bongpyeong Noodles (033-335-0242) are especially famous, and they also serve buckwheat pancakes and sliced boiled pork in addition to the noodles. You can also enjoy nutty homemade tofu and soft tofu at Sanchon Soft Tofu (033-333-5661), located near the entrance to Phoenix Park.