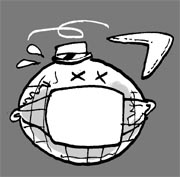 Coral reefs, inhabited by such a rich diversity of creatures that they might be called underwater rainforests, started to become more like deserts. Chlorosis caused seaweed to disappear, destroying the habitat of small organisms and depriving the sea of its beautiful color. Chlorosis has already caused 30 percent of the world’s coral reefs to die, and is still spreading in the Great Barrier Reef near Australia.

Experts have been unable to agree on just why chlorosis, a condition in which leaves produce insufficient chlorophyll, is taking place in coral reefs. Some say dirt or pollution from land is the cause, while others blame a fungus in soil that blows in from the Sahara Desert in Africa.

But most experts say the biggest reason is probably the higher sea levels due to global climate change. Carbon dioxide emitted by human activity may dissolve in the seawater and play a part in raising its acidity, too.

In 2007, the United Nations Intergovernmental Panel on Climate Change predicted that more than 80 percent of the world’s coral reefs would turn white if the average temperature of the planet rose just one degree Celsius (1.8 degree Fahrenheit). Scientists have also predicted that less than 10 percent of coral reefs will be left by 2050 if seawater continues to acidify.

Recently, scientists at the Hollings Marine Laboratory in South Carolina, the United States, revealed the mysterious cause of chlorosis. They blame a traitorous single-celled organism called Vibrio coralliilyticus. This microscopic flagellum causes no harm at low temperatures, but excretes a toxic chemical substance when the water temperature rises above 24 degrees, which puts stress on the coral.

Global warming is not only harming the ecosystem, but is coming back like a boomerang to damage even the lives of human beings. The water is literally rising around the 1,700 residents of the Carteret Islands, Papua New Guinea, in the South Pacific. Their small coral islands could soon be submerged.

The islands are on average just 1.5 meters above sea level, and they have been steadily shrinking since the 1960s. There is concern that the entire islands’ surface area of 600 square meters could be buried by the sea in five to six years. Coconut trees on the seashore have already started to be uprooted and fall, and salty seawater has trickled in to kill crops on the sparse farmland. The Papua New Guinea government plans to move the residents as soon as possible.

A climate change conference to discuss methods to reduce greenhouse gas emissions started in Copenhagen, Denmark, on Monday. Organizers describe the conference as the last chance to save the earth and the human race. This is probably because people know the future of the planet and the human race are approaching a crisis, just like coral reefs and the residents of the Carteret Islands.


*The writer is a reporter specializing in environmental issues.