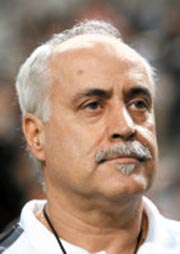 A veteran manager with more than 28 years of managerial experience is coming to Seoul.

Eduardo Manuel Martinho Vingada, better known as Nelo Vingada of Portugal, has signed a two-year deal with FC Seoul, the club announced on yesterday. Vingada replaces Turkish manager Senol Gunes who was not re-signed to a new contract after a third-place finish in the regular season and a first-round exit in the postseason.

“FC Seoul has plenty of capabilities. I will work to have the club reach the top of the K-League as well as Asia in a short period of time,” said Vingada, who arrives in Korea on Jan. 2.

“It came down to five to six candidates in the end and as we continued to narrow down our choice, we ended up with Vingada,” said FC Seoul director Han Woong-soo, to the JoongAng Ilbo. “There were candidates whom we could not reach an agreement with and although Vingada wasn’t our top choice, we chose him because he fit many of the criteria we were looking for in a manager.”

FC Seoul did not reveal the figures of the contract with the initial announcement but an FC Seoul official stated the team was looking to sign a new manager for a fee of $500,000 or less.

“If Vingada had tried to negotiate the amount of the contract, we could not have signed him to a deal. We think the fact that we are not a regional-based city and Vingada’s desire to manage a Seoul-based team listed high on Vingada’s list of priorities,” said the official.

Most noted for his term with the U-21 Portugal national team, Vingada, 56, boasts plenty of experience on the international stage. In his three-year stint with the U-21 Portugal team, Vingada managed the first of the “Golden Generation” of young Portuguese stars including Luis Figo, Nuno Gomes, Rui Costa and Abel Xavier among others to the FIFA World Youth Championship in 1991.

His experience at various professional leagues is expected to benefit the young FC Seoul squad.

In other K-League related news, IM Scouting, a football scouting database reported yesterday that Pohang Steelers manager Sergio Farias has reached a one-year deal worth $700,000 with Al-Ahli of Saudi Arabia.

Pohang won an AFC Champions League title this season and finished second in the K-League. According to the report, the signing has been delayed since Pohang is currently competing in the FIFA Club World Cup in the U.A.E.