Win might not keep Korean women in handball tourney

Win might not keep Korean women in handball tourney 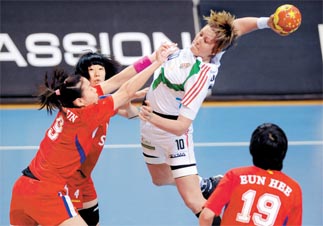 Anita Bultha, center, of Hungary shoots during a group 2 main round match between Hungary and South Korea at the 19th Women’s Handball World Championship in Suzhou, Jiangsu Province, China on Dec. 13. The match ended in a tie, 28-28. [Xinhua-YONHAP]

The national women’s handball team will need more than a victory in their final group match against Romania at the Women’s World Handball Championships in Souzhou, China tonight. In order for them to survive the group phase of the tourney, Korea will need to win their game and also root for Spain to defeat Norway as well.

It’s not the most ideal situation for Korea but having tied Hungary, 28-28, on Sunday, Korea currently has five points on two wins, one draw and one loss.

“We are solely focused on defeating Romania at this point. We will try our very best until the end of the tournament,” manager Lee Jae-young was quoted as saying by Yonhap. “Romnia has height advantage but their players are also individually skilled, making them a tough team to play against. We will go with veteran players to start the game and will look to some of our younger players throughout the game for support.”

If second-placed Norway should defeat group leader Spain tonight, Korea will be automatically eliminated from the tourney even if they should manage a win over Romania. With the win, Norway would end the group phase with eight points and Korea and Spain will tie for second place with seven points. Since Korea lost a game to Spain earlier in the tourney, Spain would advance along with Norway.

If Spain and Korea both manage to win their games, the two teams will advance out of the group. With the national team set to play their game at 10:15 p.m., they will face their East European opponents after the game between Spain and Norway.

Korea’s women’s handball team has fared better at the Olympics over the years, regularly placing among the top four teams. Since qualifying for their first Olympics at the 1984 Los Angeles Summer Games, Korea earned gold medals at the 1988 Seoul Olympics and 1992 Barcelona Olympics.