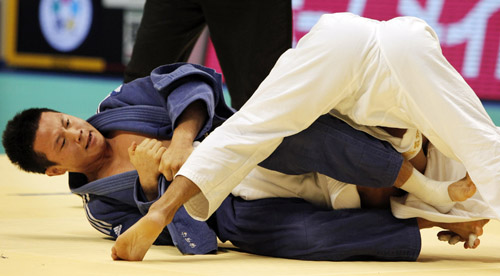 South Korean Wang Ki-chun, a World Championships titleholder in the -73 kilogram division, ended the 2009 season in a dominating fashion. The 21-year-old swept all the major titles this season and surpassed his predecessor to set a new domestic record over the weekend for most consecutive wins.

Competing in the -73 kilogram division at the Grand Slam Tokyo judo tournament at the Tokyo Metropolitan Gymnasium in Japan on Saturday, Wang defeated Yasuhiro Awano of Japan on an armbar ippon (an ippon is the decisive point that wins a match).

After the win, Wang celebrated by holding up three fingers to indicate his third grand slam title of the season.

The win also gives Wang his third consecutive Grand Slam Tokyo title and his 52nd consecutive win. In defeating his six opponents at the tourney held in Tokyo, Wang surpassed the record of 48 consecutive wins set by 2004 Olympic gold medalist Lee Won-hee in 2003.

Ranked first in the International Judo Federation’s world-ranking system, Wang’s current winning streak started in December of last year at the Kano Cup, the previous name for the Grand Slam of Tokyo. Wang went on to win every major tournament in the past year, placing first at the Paris Grand Slam in February and at the Moscow Grand Slam in May. He also won his second consecutive title at the 2009 World Judo Championships in Rotterdam, The Netherlands, over Kim Chol-su of North Korea in October.

The 21-year-old first gained popularity when he defeated Lee in the domestic qualifying tournament for the right to compete at the 2007 World Championships in Rio de Janeiro, Brazil. Wang went on to win the world title, and earned a reputation as one of the world’s best judokas. He defeated Lee again at the 2008 Beijing Olympics trials and ended up with a silver medal after losing to Elnur Mammadli of Azerbaijan in the finals.

Wang did have some personal setbacks this season. He was questioned by the police for allegedly slapping a female patron at a night club in Yongin, Gyeonggi, in October. Wang admitted to his wrongdoing and, although the case was settled out of court, he immediately announced his retirement from the sport on his Web site and disappeared for approximately a week.

Meanwhile, Kim Jae-bum had an impressive run at the Grand Slam Tokyo tournament. He reached the finals of the -81 kilogram division, but later lost to Euan Burton of Great Britain and ended up with a silver medal.

Judo fans went away happy from Grand Slam Tokyo, a three-day event that came to a close yesterday, because of the increase in wins by ippons. According the IJF’s Web site, a new rule that prevents grips below the belt line led to more than 60 percent of the matches ending with ippon.

“We are happy to see the true judo spirit coming back,” stated IJF President Marius Vizer on the IJF Web site. “The changes are important for the future of judo.”