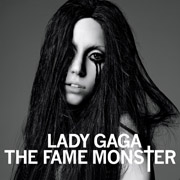 A friend of mine studying fashion at Parsons in New York recently told me she was fascinated by Lady Gaga because she’s not afraid of looking ugly.

Indeed, Gaga “wants your ugly” and “your disease,” as she sings on her latest runaway hit single, “Bad Romance.” Such unnerving lyrics are characteristic of this artist, whose new mini-album, an expansion of last year’s “The Fame,” declares that being pretty is the least of her concerns.

With her eerie album cover shots and the promising track “Monster,” Gaga has the pop and fashion worlds firmly in her clutches. The most self-referential of all the songs on the album, its creepy chorus of “He ate my heart” samples “Who Shot Candy Warhol?”, the artist’s short film that prefaces her live shows, and at one point hearkens back to The Fame’s album opener, “Just Dance.” On “Dance in the Dark,” Gaga catalogues her inspirations, including JonBenet Ramsey, much like Madonna in “Vogue.” Here’s hoping that one day, future artists include her in their own mix.