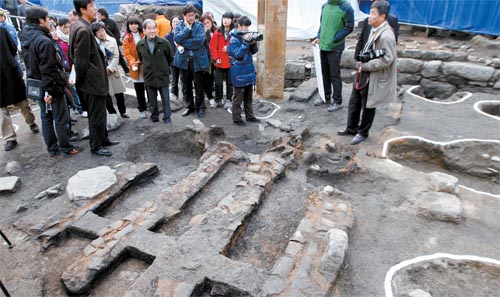 Members of the press and officials with the Cultural Heritage Administration’s Cultural Property Committee look at archaeological finds at the construction site of the new City Hall building in Jung District earlier this month. [YONHAP]


On a cold afternoon earlier this month, an interesting scene unfolded at the construction site of the new City Hall building in downtown Seoul.

In one area, construction workers were immersed in the daily grind, with some shouting directions to a colleague in an excavator moving a huge metal beam. In another area, archaeologists equipped with picks, trowels and other tools carefully uncovered roof tiles stuck in the ground. And inside a deep pit in the middle of the site, scientists wearing blue vinyl gowns, caps and gloves collected soil samples. 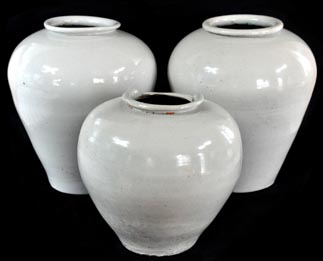 Porcelain jars found in Pimatgol. Historians say the quality of these are as good as porcelain pieces designated as national treasures. [JoongAng Ilbo]

While it might seem odd that these diverse groups worked in the same area, it’s becoming a common scene across Seoul as the interests of builders, archaeologists and scientists increasingly collide. A number of recent construction projects have led to the surprising discoveries of everything from ancient porcelain bowls and animal remains to arrowheads and old rifles. These finds have sent archaeologists into a frenzy and helped shed light on the history of Seoul. But some observers are worried that much of the past will remain buried or be destroyed as new buildings crop up around town without regard for the history below them.

For much of its existence, Seoul has been defined by foreign invasion, war and political upheaval. In recent times, the city built over the rubble of its past during its march toward industrialization. Many people thought it had little left to offer when it came to historical finds, considering its turbulent past.

But recent discoveries have changed that perception, and local archaeologists are thrilled. Some now say that Hanyang, which is what locals called Seoul during the Joseon Dynasty (1392-1910), is literally buried under the city.

Archaeologists have good reason to be excited. Last summer, they discovered Igansumun - a gate that controlled the water flow from Mount Namsan to the Cheonggye Stream - in the Dongdaemun area. The discovery occurred during the demolition of the old Dongdaemun Stadium, an area that is being turned into a park. Shortly thereafter, archaeologists unearthed 600-year-old soil embedded with artifacts about five meters (16 feet) below the asphalt in the Gwanghwamun area during construction of the new public square there.

And the new discoveries keep coming.

Last month, three precious white porcelain jars, estimated to be from the 15th and 16th centuries, were recovered in the middle of Pimatgol, an alley in Jongno that for centuries has been a commoners’ area filled with food and drink vendors. And this month, a 16th-century cannon part, rifles and arrows were unearthed in downtown Seoul at the site of the new City Hall building, hinting that the area may have housed a weapons factory or warehouse.

These finds, unearthed between 1.5 and six meters underground, have triggered the imagination of history lovers and offer perhaps the most vivid picture yet of what Seoul looked like long ago. Many of these artifacts will likely make their way to museums and history exhibitions, helping Koreans learn more about their past. The discoveries have given rise to hopes that there is still much more that lies below the surface of Seoul.

The discoveries, however, have also brought up a host of issues related to current construction laws and practices, which some observers say help ensure that many artifacts remain buried or are unintentionally destroyed.

Under the current law, builders must call in archaeologists to conduct an inspection on the surface of the earth before construction takes place on sites larger than 30,000 square meters (7.4 acres). If archaeologists determine that there is a high likelihood that relics can be recovered underground, they can initiate an excavation.

But there’s a loophole: When the construction site is smaller than 30,000 square meters, builders can, with the consent of the respective district office, skip the inspection and even the excavation.

Construction of the new City Hall building, for instance, started without the initial inspection. Before excavation began at the construction site, numerous metal beams were planted as far as 15 meters below the ground, which might have destroyed artifacts.

“If city development projects in Seoul continue in the way that they’re conducted now, it’s just a matter of time before the history of the city totally disappears,” said Ji Geon-gil, the chairman of the Buried Cultural Property Committee at the Cultural Heritage Administration, which operates under the Ministry of Culture, Sports and Tourism.

“Builders should design their buildings after archaeological inspections and excavations are completely finished, but we are doing the exact opposite,” said Hwang Pyeong-wu, the chief of Cultural Action and head of the Korea Cultural Heritage Policy Research Institute.

There’s not a simple solution, however, as builders have concerns of their own.

Under the current law, the owners of buildings and those behind construction projects must pay for archaeological inspections and excavations. The typical excavation costs 10,000 won ($8.64) for every three square meters, meaning costs can easily run into the billions of won. They also suffer from losses caused by the delay in the construction process. The initial inspection takes up to 30 days - or longer with the necessary approval - while excavations can run from a week to a year. And the owners don’t get anything in return, as all the cultural properties unearthed from the ground automatically belong to the country.

“It doesn’t make sense,” said Kim Hong-sik, director of the Hanul Research Institute of the Cultural Heritage Foundation, which has led some high-profile excavations, including the one at the Pimatgol site. “Builders pay for all the costs for archaeological inspection and excavation, endure a prolonged construction process and are expected to bear with all the losses on their own. The government should give such builders some motivation and incentives like, for instance, relaxing construction regulations.”

The current setup works in reverse, providing a strong disincentive for companies and builders to make way for archaeological finds.

“For this reason, among the owners of buildings it is considered ‘bad luck’ if some relics turn up,” said Lee Nam-gyu, a Korean literature professor at Hanshin University in Gyeonggi Province. “It’s irresponsible for the government to pass along the important task of archaeological inspection and excavation to companies and individuals.”

Critics of the current building process acknowledge that development must take place.

But some say a good first step is to at least recognize that a treasure trove might lie below.

“Designating the area within the city’s four major gates as some sort of ‘special culture zone’ should be a top priority,” argues Na Seon-hwa, a member of the Cultural Heritage Administration’s Cultural Property Committee.

Kim Bong-ryeol, an architecture professor at Korea National University of Arts in Seoul, suggests that documenting what’s below the ground should be the primary focus for now.

“The goal in the long run should be completing a comprehensive map of underground cultural properties of different eras,” says Kim. “They are, after all, part of the legacy left for all of us.”