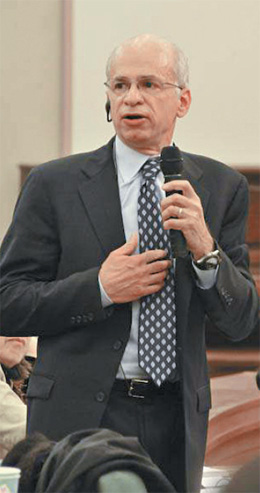 
The Korean Unwed Mothers Support Network, also known as Kumsn, is one of just a handful of organizations dedicated to supporting unwed mothers in Korea. Since its establishment in 2007, the organization has carried out various projects and research to advocate for the rights of unwed pregnant women and mothers and as well as their children. It was founded by Richard Boas, 59, an American ophthalmologist, who adopted a Korean daughter 20 years ago.

Boas, who was initially a strong supporter of international adoption and even initiated an adoption foundation in the United States, abandoned those efforts after a trip here in 2006, where he met a dozen unmarried pregnant women between the ages of 18 and 24 who had already agreed to give up their children to a welfare facility in Korea.

He then began to work vigorously for unwed Korean mothers and their children, eventually establishing Kumsn. Following are excerpts from a recent interview with him.

Q. You’ve said before that “all moms have a right to raise their children.” What are the most urgent areas that need to be addressed when it comes to support for unwed mothers?

A. Unmarried pregnant women need counseling and resources that will help them make the best decisions - both for themselves and their babies. We believe that many women give up their babies in Korea because they feel social and economic pressure to do so. For women who wish to keep and raise their children, financial support, education/job training, childcare, housing and medical assistance need to be available, and they need to meet their needs. More scholarly research on demographics of Korean unwed women and their children is a necessary prerequisite to advocate for change.


Your organization says that 70 percent of unwed Korean mothers give up their children, while in U.S. just 2 percent do. What do you think is the main reason behind the difference between the two countries?

A strong stigma against unwed mothers from families, society and government, Confucian beliefs, fear of poverty and promotion of adoption are the main factors behind the high rate of relinquishment. Unwed mothers in the U.S. and other countries like the U.K., France, Australia and Canada are not discriminated against and receive appropriate support.


You started Kumsn in 2007 and are now helping others start a new organization here, tentatively called the Korean Unwed Mothers Family Association. What does it mean to you to help such an organization get off the ground?

Right now, after less than three years, Kumsn is already making a difference in Korea. We’ve provided moderate grants for scholarly research and direct support for some women and children - including setting up a community-based center for them, which provides counseling and crisis intervention - as well as supporting agencies that advocate on their behalf.

Right now, my program is unique to Korea, but I know there are women and children worldwide who could benefit from similar work. My program can serve as a model for them and their respective countries. Helping unwed Korean moms keep and raise their children is part of a larger issue, which the world sorely needs to address if it is to truly move forward.