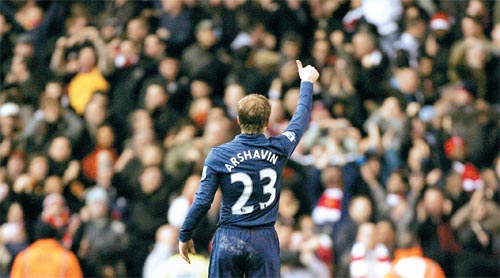 Arsenal fell behind to Dirk Kuyt’s goal shortly before halftime but levelled soon after the break through a Glen Johnson own-goal. Russia international Arshavin, who scored four goals in last season’s 4-4 draw at Anfield, then produced a sublime moment of skill to complete Arsenal’s comeback with a slickly-taken forceful shot just before the hour mark.

The victory saw Arsenal regain third place and move to within six points of leaders Chelsea - which were held to a draw by Everton on Saturday - and three of second-place champions Manchester United, beaten by Aston Villa on Saturday. In contrast, the defeat left Liverpool five points adrift of the top four finish.

There was little between the two teams in a scrappy opening to the game, but Liverpool should have taken the lead with 11 minutes on the clock. Steven Gerrard raced down the right and timed his cross perfectly for Fernando Torres, but the striker shot disappointingly straight at Arsenal goalkeeper Manuel Almunia. Almost immediately, Liverpool’s star men combined again with Torres slipping Gerrard through and the Reds captain going down under a challenge from William Gallas with the home players appealing for a penalty.

Arsenal’s first real threat came with a free-kick swung in by Cesc Fabregas, but Thomas Vermaelen could only head over from around eight yards out. Liverpool continued to enjoy the ascendency and after Arsenal goalkeeper Manuel Almunia’s desperate punch to clear Gerrard’s free kick, Johnson’s follow-up was deflected wide.

Just before the half-hour mark, Kuyt burst into the area from Johnson’s quick throw and squared for Gerrard, whose drive at goal was blocked by Alex Song. Arsenal looked dangerous on the break without ever creating good chances and Denilson’s lofted effort from 25 yards, easily held by Pepe Reina, was an indication of their frustration.

In the 41st minute Liverpool took the lead through Kuyt. Almunia failed to deal with Fabio Aurelio’s clipped free-kick into the area, only palming the ball away, and Dutch international Kuyt rolled the ball into an empty net for his sixth goal of the season. But five minutes into the second half, Samir Nasri’s deflected cross eventually rebounded off Johnson and into the Liverpool net.

Torres looked for an immediate response but he was thwarted by Almunia after a powerful run into the box. In the 58th minute, Arsenal moved in front thanks to another Anfield goal from Arshavin. Johnson hesitated and failed to deal with Fabregas’s lob into the area, and Arshavin was first to react, hitting a first-time shot that flew in off the post with Reina rooted to the spot. Liverpool rallied and Kuyt’s whipped cross from the right was steered just wide of goal by Torres. But Arshavin threatened once again with a 20-yard drive that Reina held at his near post. Despite some concerted pressure, Liverpool slipped to a sixth league defeat of the season.