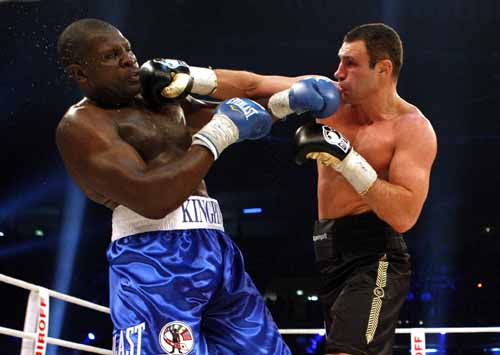 Defending champion Vitali Klitschko, right, from the Ukraine and his challenger Kevin Johnson from the U.S. trade punches during their WBC heavyweight title fight in Bern, Switzerland, Dec. 12. Klitschko won after 12 rounds by points. [AP]

The 38-year-old Ukrainian spent the entire fight on the offensive against previously unbeaten Johnson but could not find his customary knockout as his opponent opted for survival. A sell-out 17,000 crowd at Bern’s PostFinance Arena willed the 38-year-old Klitschko to finish the job inside the distance, as he had done in 37 of his previous 38 victories from 40 fights, but Johnson’s chin was up to the task, even though he rarely landed a meaningful punch.

“He was a very unusual fighter,” Klitschko said at ringside after his fourth win since returning to action in 2008 following an injury-induced retirement in 2005. “He moved very well and was not easy to hit. I’m disappointed because I would have preferred a knockout but I’m happy that I won all 12 rounds.”

Johnson’s chief tactic appeared to be to irritate the champion, gesticulating throughout the fight and pointing to his chin and tempers flared briefly at the end of the 11th when the fighters traded punches after the bell.

Vladimir Klitschko, Vitali’s younger brother and holder of the WBO, IBO and IBF, also became involved in a brief exchange with Johnson after the final bell at the end of the 12th. Klitschko said he hoped to take on Briton David Haye, who beat Russian giant Nikolai Valuev last month to win the WBA belt, in a unification fight next year.

“I’m ready,” Klitschko said. “I will be happy to fight him next year. David Haye is the trash-talking world champion.”

In the World Boxing Council and World Boxing Association super flyweight title match, Australia’s Vic Darchinyan knocked out Mexico’s Tomas Rojas in the second round on Saturday in Rancho Mirage, California. The Armenian-born Aussie fighter flattened Rojas after two minutes and 54 seconds of the second round, improving to 33-2 with one drawn by taking his 27th victory inside the distance in the matchup of southpaw stars.

Rojas fell to 32-11 after his first loss in more than two years. The Mexican landed more punches and kept Darchinyan on the move over the first five minutes, but the champion was simply waiting for the right moment to strike.

“He was punching me. He was making more punches than me. But I knew my time would come,” Darchinyan said. “I just took my time. I used my skills. It’s about mind. It’s not just power. I had to mentally be ready.”

Darchinyan’s moment came late in the second round when a left to the head set up a powerful left to the chest that Rojas tried to duck. Instead, the Mexican moved his head directly into the path of Darchinyan’s punch and was caught on the chin and then hard in the chest before falling onto his back.

“He was going to duck it. I knew it,” Darchinyan said. “I didn’t go for his head. I went for his chest. He put his head right in the way of my punch.”

Seconds later, Darchinyan had the victory, improving to 11-2 in world title fights.

Darchinyan, who stopped Mexico’s Jorge Arce in 11 rounds in a February title defense, lost a unanimous decision to Ghana’s Joseph Agbeko last July when he moved up to fight for the International Boxing Federation bantamweight crown. Reuters, AFP