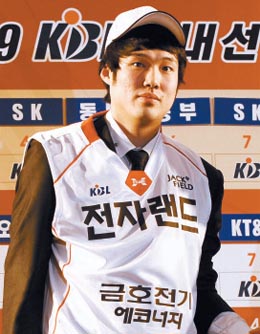 Apparently, ET Land Elephants rookie guard Park Sung-jin is not happy with his performance in the KBL so far this season.

“If I had to evaluate myself, I’d give myself about a zero out of 10,” stated the top pick in the 2009 KBL Rookie Draft. When asked why he thought so, Park replied: “There’s no reason. I just think that way.”

Despite Park’s tough self-assessment, the rookie point guard has not been all that terrible for the Elephants this season. He is averaging 8.6 points and 3.4 assists per game. His statistics aren’t far behind those of SK Knights’ Byun Hyung-soo. Drafted fourth overall out of Myongji University, Byun is considered the favorite to take the top rookie honors this season and is averaging 9 points and 3.3 assists.

In professional sports, individual statistics don’t mean much if they don’t contribute to team wins. Park’s Elephants are currently in last place in the league standings with a record of six wins and 19 losses, and are 11.5 games behind first place Mobis Phoebus. As the top draft choice, more is expected of Park and he feels the responsibility of being taken first in his class.

Despite the burden that comes with being chosen early on draft day, Park has not received a whole lot of media attention this season. The rookie stated this was his first interview as a professional. Even after team wins, he has not received interview requests. Prior to the start of the season, media placed more interest on the half-Korean players such as Chun Tae-poong and Lee Seung-joon.

“I’m not happy about it. I think it will bother me all season,” Park had stated on the lack of media coverage on domestic rookies prior to the start of the season. When asked about Chun, Park kept his answer brief: “He plays well and has a good set of skills.”

Park and Chun are similar in their style of play. They are both point guards who like to shoot and slash to the basket more than pass. Park regularly put up 20 points and five assists per game at the collegiate level. At the professional level, he’s had to change his game. The KBL places more emphasis on team play, and as such, point guard is a position that requires the ability to find open teammates and manage games more than score points.

Park struggled to adapt to the new style of play early on in the season. He failed to utilize the front court on offense and committed turnovers in key situations. That’s not to say the Elephants player lacks passing skills. During the Dec. 5 game against the Samsung Thunders, Park threaded an accurate pass to Amal McCaskill with the game tied at 74 and six seconds left on the clock. McCaskill received the pass and threw down a powerful dunk. The effort put a damper on Samsung’s momentum, and the Elephants ended up winning the game 76-75.

Park is busy these days learning how to read the opposing defense from his head coach Yoo Do-hoon. He is working on looking for mismatches on the opposing team’s defense in set pieces and also on two-on-two situations. On top of that, he is keeping a close eye on Daegu Orions point guard Kim Seung-hyun and his style of play in the hopes of learning.

“I want to become a guard who averages 10 points and 10 assists rather than 20 points and six assists per game. I know that an assist is more valuable to a team than a three-point shot,” stated Park.

The season has been especially tough on the rookie considering Park was an integral part of the Chung-Ang University team that won 52 consecutive games. From his sophomore to senior years on the team, Park experienced a total of less than five losses.

Things have been different in the pros. He is experiencing many losses and the team is losing consecutive games.

“We have to improve our record and I must gradually improve my game. I think I can give a clear self-evaluation at that point,” stated Park.