Designer seeks to make his own brand

Designer seeks to make his own brand 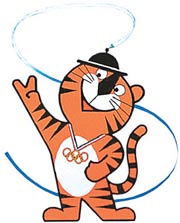 Korean designer Kim Hyun has been a pioneer in the field of graphic design for the past 40 years, designing many of the images people now associate with Korea. In recent years, he has begun to play a large role in the branding of the country with the designs he has created for the government, corporations, cultural institutions and major sporting events.

Kim has also created identities for a wide range of things that are present in our daily lives, including “T-Money” transportation cards and the “Hi Seoul” ad slogan. 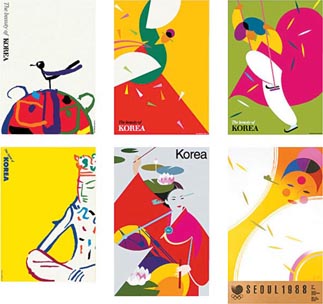 Kim is probably best known as the creator of “Hodori,” the official mascot of the 1988 Summer Olympic Games in Seoul. The amicable tiger, engraved into every medal, was designed by Kim when he was 35 years old and has proven to be his most recognizable work to date.

Afterward, Kim started his own design company, named Design Park, to further his career. Since then, the company has produced more than 400 designs for major corporations, including iriver, a producer of digital media players; Kyobo Life, an insurance company; the 2010 Yeosu Expo; the Korean Film Council; the Korea Trade-Investment Promotion Agency and the Samsung Lions basketball team, among many others. 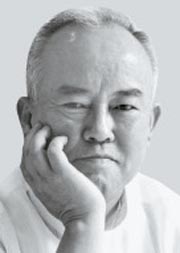 Kim Hyun has designed many of the images that people now associate with Korea, including these posters, above, and “Hodori,” the official mascot for the 1988 Summer Olympic Games in Seoul. Provided by Design Park

To celebrate the 40th anniversary of his career and the 25th anniversary of Design Park, the Hangaram Design Museum at the Seoul Arts Center exhibited works by Kim and his collaborators from Dec. 2 to 10.

Despite all he has accomplished, however, Kim described his work as a “never-ending struggle,” and indicated that he would like to begin a new chapter in his career.

“Designers rely heavily on their clients, as they are the ones who make our job possible. Putting all of your effort into the designs, while trying to deal with the complaints and demands of the clients, drains all your energy. I want to end my 40-year career of designing for my clients, and make a fresh start designing the things I want to design,” Kim said.

He began by expanding upon his original designs of Hodori, which were also featured in the exhibition. Using tigers as his main subjects, he created numerous products, including umbrellas, neckties, mufflers, watches, mobile phones and notebooks. He is hoping that these and other similarly inspired creations will become popular in 2010, which coincidentally is the year of the tiger according to the Chinese zodiac.

Kim also hopes to create products that can be recognized internationally. But he worries that his work will be seen as superficial.

“The art of design begins with your heart and mind. Our hands are merely the tools we use to express our emotions and thoughts,” he said. “Most people misunderstand our work as merely transforming something bare into an attractive image, and this misconception worries me a little.”

In the next 10 to 20 years, Kim says he is planning to stay at a temple located at the top of Seoul’s Inwangsan Mountain so that he can be near tigers.

“I would like to live near tigers until the day I die,” he said.