Precious relics of an ancient civilization

Precious relics of an ancient civilization 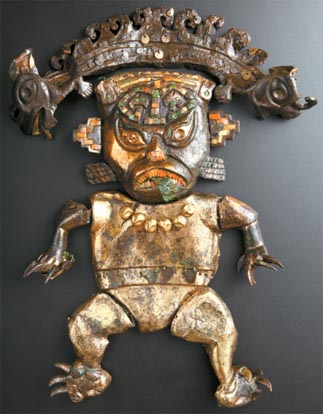 The Incans called their capital Cusco, meaning “belly button of the universe.” The Inca Empire collapsed in the early 16th century but Cusco, located 3,399 meters (11,151 feet) above sea level in Peru, still contains many relics from what was one of the earliest civilizations in the world.

The exhibition “The Great Myth and Mystery of Peruvian Civilization: Inca,” which began Friday at the National Museum of Korea in Seoul, provides a glimpse into this lost culture by showcasing the Inca Empire’s development from over 20 ancient Andean civilizations. The exhibit also commemorates the 100th anniversary of the museum as well as the 20th anniversary of Korea-Peru bilateral cultural relations. 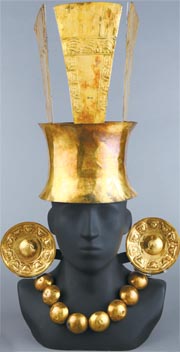 It is known that the Inca ruled an empire based in the central Andes from 1430 to 1532, when they were conquered by the Spanish army. By that time, the civilization had been in existence for nearly 5,000 years, and encompassed many minor civilizations, including the mysterious Nazca culture, which is famous for the Nazcan Lines, a series of geoglyphs in the Nazca Desert in Peru.

The 351 artifacts on display - including mummies, jars, ornaments, weapons, textiles, ceramics and sculptures from nine museums in Peru - paint a portrait of the Inca Empire and the Inca civilization that preceded it. Some of the items on display show just how advanced the Inca were. Human skulls with holes show that the Inca used highly sophisticated medical techniques and were able to perform brain surgeries.

“People who had brain surgery continued to live after surgery,” said Choi Hyung-sun, assistant curator of the museum.

Choi also pointed out another feature of the exhibition - the mummies.

The oldest mummies in the world come from the Inca civilization, not from Egypt, Choi said.

The mummy in this exhibit is from the Chiribaya period (900-1440). The area has dry soil that contains a high amount of salt, which helped dry the body. Unlike Egyptian mummies, which are mummified in a supine position, the Inca mummified their dead in the seated position. Some mummies had their organs taken out and replaced by coca leaves or llama hairs. Often, animals were buried with their human counterparts. Two such animals, a mummified dog and a monkey, are displayed in this exhibit.

The exhibition is divided into three sections showing the Inca Empire; the civilizations that preceded the empire, including the Nazca, Moche and Chimu; and the ancient Andean culture and myths of the times.

One of the notable relics here is the sculpture of a “Feline Figure” produced in the Moche period (100-700). Made of gilt bronze, the piece was found in the pyramid of King Sipan. The crown is shaped like a snake and has a jaguar head on both ends. In the Andean civilizations, the bird, jaguar and snake symbolized the power of the sky, land and underground, respectively. Its menacing shape makes it quite intimidating.

Yet another piece of interest is the sacrificial knife, known as a tumi, from the Lambayeque period (750-1375). The tumi is a semi-circular knife that was used in sacrificial ceremonies. Blood from the sacrifice was then poured into a cup that was presented to the god.

The Inca Empire came to an end in 1532, and historians have speculated that there are several reasons for its demise: the Spanish invasion, long-standing tribal wars and a smallpox epidemic.

The empire was rich with gold but when the Spanish arrived and conquered the Inca, they took their gold artifacts as war trophies, melted them and shipped them to Europe. All of the golden artifacts in this exhibit are burial goods.

“The relics are significant because they not only show the lost culture [of the Inca] but also reveal something about the society of the civilization,” Marcela Lopez Bravo, Peruvian Ambassador to Korea, said in a press conference at the opening of the exhibit.