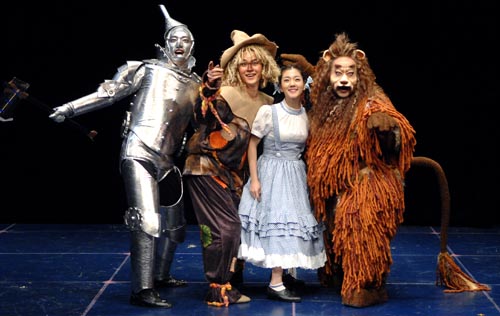 The Seoul Metropolitan Musical Theater is presenting an encore performance of the hit Broadway musical “The Wizard of Oz” at the Sejong Center for the Performing Arts. It will run through Dec. 28. See THEATER, below. [JoongAng Ilbo]

Today: “Stefan Jackiw’s Violin Recital.” Talented violinist Stefan Jackiw will make his Korean debut in time for the release of his first album.

Stefan Jackiw was born in the U.S. to a Korean mother and Polish father. He started playing the violin at the age of 4, when he was given a small instrument that a child of family friends had outgrown.

As a young child, he took Suzuki method lessons at the Longy School of Music. He has also studied under Zinaida Gilels, whom he credits with providing him a secure technical foundation; the French violinist Michele Auclair, with whom he began studying at age 12; and former Cleveland Quartet first violinist Donald Weilerstein.

Unlike many musical prodigies, who attend schools for the arts or are homeschooled, Jackiw went through the academic school system, attending the Roxbury Latin School in Boston. After high school he attended Harvard University, starting as a psychology major and then switching to a concentration in music.

Pianist Max Levinson will accompany him for Brahms and Beethoven sonatas, among others.

Today: “Korean Contemporary Dance: Cry of the Soil.” This is a creative work for the third year of the project “Research on Contemporary Experimental Dance in the Image of Korea” spearheaded by the Seoul Foundation for Arts and Culture.

Choreographer Kim Bok-hee is a dancer who cherishes humanity. Kim tries to portray history through the cries of the soil and the human beings that trample upon it.

In this piece, the choreographer tries to visualize these cries through dance on the stage.

Today: “Sarah Chang’s Recital.” An American-born Korean violinist, Sarah Chang, is visiting Korea this December for a nationwide tour. Scheduled to play recitals in 10 cities across the country, this tour will be her first in Korea in over 10 years.

Playing since the age of 8, Chang has been recognized for her seemingly natural musical talent. She is now one of the most sought-after violinists in the world.

Chang has played with top orchestras, toured several major cities and collaborated with some of the best musicians playing today.

In her solo recital at the Seoul Arts Center, Chang will perform a repertoire consisting of compositions by Brahms, Theofanidis and Franck. As an added bonus, pianist Andrew von Oeyen will make a guest appearance.

Earth, Wind & Fire first came together 40 years ago. Since then, it has become one of the most respected and admired bands of their generation. Ranked as the seventh all-time best-selling musical group, the band has won countless awards including 10 Grammys and four American Music Awards.

Earth, Wind & Fire’s music consists of a variety of genres and many unique combinations. Ranging from Latin, disco, funk and soul to pop, rock and even jazz, their music has made an unforgettable impact on American music and has influenced too many musicians to count.

In their first concert in Korea, the band will introduce a selection of hit songs from their previous 19 albums, including “Shining Star” and “September.”

The performance will start with Vivaldi’s flute concerto, “Four Seasons: Winter,” followed by erhu concerto “Hyang,” which is composed by Park Beom-hoon, and will be played by Chinese erhu player Yang Wen-na.

Then a gayageum concerto with the theme of “excitement,” will be performed by Important Intangible Cultural Property Ji Soon-ja. The concert will conclude with a joint performance by the Kenya Children’s Chorus and the Seoul Metropolitan Youth Traditional Music Orchestra.

In addition to performances by top musicians Songsolnamoo, Vivavoce and Feeling Station, there will also be a special performance featuring a haegeum, a traditional instrument, that has been modified to play electronic music.

In addition, the Seoul Metropolitan Junior Chorus and Korea Opera Choir will be on stage to sing Christmas carols.

As one of Korean musical fans’ most beloved shows, the Wizard of Oz earned a great deal of praise and acclaim during performances staged earlier this year and will reopen this Christmas to satisfy the demand from its growing fan base.

Award-winning musical actress Lim Hye-young will once again play the role of Dorothy, performing all the famous musical numbers including all-time favorite “Over the Rainbow.” With six different stage settings and brilliant lighting, this production will bring the world of Oz alive before your eyes.

This fairy tale ballet is performed in two acts, four scenes and a prologue based on E.T.A. Hoffmann’s “The Nutcracker and The Mouse King.”

The Nutcracker has become perhaps the most popular of all ballets, performed primarily around Christmas time.

Choi Tae-ji is the artistic director of this performance, which draws upon the choreography of Yuri Grigorovich.

Grigorovich is a Russian dancer and choreographer who dominated the Russian ballet scene for 30 years. He graduated from the Leningrad Choreographic School in 1946 and danced as a soloist with the Kirov Ballet until 1962. His staging of Sergei Prokofiev’s “The Stone Flower” and “The Legend of Love” brought him widespread acclaim as a choreographer.

Freed from the ballet format, the Seoul Metropolitan Junior Chorus present The Nutcracker in the form of a choral musical, which they hope will make it easier for young audiences to understand.

The performance presents a special opportunity for audiences to experience the fairy tale world Drosselmeyer creates, in the format of the choral musical.

Tchaikovsky’s “The Nutcracker and the Mouse King,” which is based on a children’s Christmas story, beautifully describes the world of fantasy as relayed through the dream of the main character, Clara, and those she encounters, including the Sugar Plum Fairy and the Mouse King.

During the performance, audiences can participate by joining in a sing-along of Christmas carols.

Through Jan. 10: Over 500,000 light bulbs will brighten the city of Daejeon this winter. Sponsored by the city’s Jung District, the 2009 Lucefesta celebrates light as a symbol of hope. Starting from Euneujeongi Culture Street in Eunhaeng-dong, the beautiful LED lights will cover popular streets, tunnels and statues in Daejeon.

At Ppuri Park there will be displays of noted local historical figures, along with an exhibition of traditional lanterns and lamps.

Additionally, a concert will take place at Urideul Park on Christmas Eve, a dance festival on Dec. 30 and a grand release of helium balloons will occur on New Year’s Eve.

Take a bus from Express Bus Terminal to Daejeon.

Dec. 19 to 24: During the festival period, major buildings such as Dongnimmun (Independence Gate), the Sejong Center for the Performing Arts and the Seoul Metropolitan Council building will all be decorated with silver-white lights.

There will be an ice skating rink in the center of Gwanghwamun Plaza, and surrounding it will be various light installations, such as chairs, snow sleighs, igloos and towers. At the nearby Cheonggye Stream, a silver-white colored screen will be displayed. In addition, a dazzling laser show will take place there every night during the festival.

Nighttime in downtown Seoul will be made even more beautiful by the 300 trees decorated with white lights, which will line the streets from Gwanghwamun to Namdaemun.