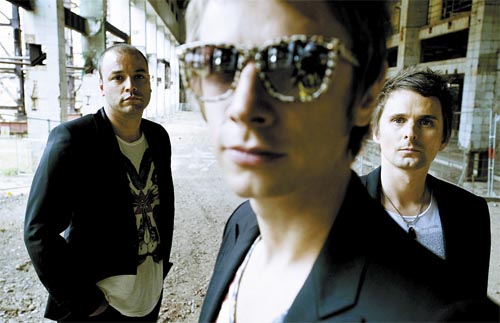 British rock band Muse will be performing in Korea in January. Provided by the organizer

Korean music fans are no stranger to Muse.

The British alternative rock band - with members Matthew Bellamy (vocals, guitar, piano), Christopher Wolstenholme (bass, backing vocals) and Dominic Howard (drums) - held their first concert in Korea in 2007. Later that year, they performed as the headliner at the Pentaport Rock Festival, one of the country’s major music festivals.

Wolstenholme was once quoted as saying that “[Muse] evolves as the scale gets larger.”

The band has certainly evolved, and then some, since their debut in 1999. In October, Muse embarked on a world tour to promote their fifth studio album “The Resistance,” which will take them to Korea, Japan, New Zealand, Australia, Singapore, Hong Kong, the United States and Canada.

Besides their extravagant live performances, another attribute that keeps the music world talking is the band’s musical style. The group plays music that embraces many genres, including European and Asian music.

Bellamy, commenting on the band’s previous album, “Black Holes and Revelations,” said that he was inspired by music from Naples, which contains a mix of sounds from Italy, Africa, Croatia and Turkey, giving it a mystical feel. “I like being influenced by things that have a mixed style,” he says.

In The Resistance, which is the first Muse album to have been produced by the band itself, one can also find hints of classical music.

The response to the album has largely been positive, not just around the world but also in Korea. The album has sold 1.4 million copies worldwide since its release three months ago. In Korea, it sold 10,000 copies in its debut week, becoming the fastest-selling pop album in the country this year.

Some reviewers have likened the band to Radiohead, citing similarities in the vocal styles of lead singers Bellamy and Thom Yorke. One critic called the band the “Jekyll and Hyde” of the music world, noting the irresistibility of its charms.

Come January, Koreans will get to see how far the band has come as well as make some predictions about where their style is going.