Mixing two contrasting elements together isn’t often the best recipe for success, but on occasion it can bring about surprising results.

Look no further than the fashion world, where a creative convergence of modernity and tradition has become quite commonplace. 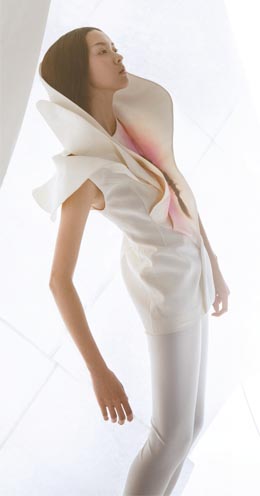 A dress made with hanji fabric inspired by flower pedals designed by Shimizu Aika, an Esmod Osaka student. Provided by Vogue Korea

The local fashion scene is no different as local designers attempt to incorporate traditional values and styles into modern creations. And that’s where hanji, or traditional Korean paper, comes in.

Some of the newest clothing styles in the domestic market incorporate hanji fabric, and these designs are starting to gain a foothold internationally as well.

Hanji even stole the stage at recent fashion shows held by the Seoul branch of the Esmod International Fashion University Group. The university hosted one show in late November at Kring, a cultural center located in Daechi-dong, southern Seoul, and another from Dec. 7 to 11 at Jeonju City Hall in North Jeolla.

The central theme of the events, held to commemorate the 20th anniversary of the opening of the Seoul branch of Esmod, revolved around hanji, and all designs contained fabric made with the paper.

A total of 67 works by students who are attending 17 Esmod schools from 12 countries participated in the exhibitions, further spreading the idea of using hanji in fashion.

Unique to the nation

The use of Korean paper in fabrics dates back several years, when it started appearing in some children’s clothing, underwear and garb worn by people suffering from atopic syndrome, a skin condition.

Park Yoon-jung, the director of Esmod Seoul, was the driving force behind the exhibitions.

While attending the annual general meeting for Esmod schools over the years, Park said she was often asked if Korea had a fabric or material unique to the country.

She always struggled to provide an adequate answer, which stung her pride a bit.

“Norway is known for their high-quality wool and Tunisia has tapi. However, I could not think of a material that was distinctly Korean that I could introduce to others at the meeting,” Park said.

She found the answer, however, three years ago during a visit to Jeonju, North Jeolla, where she came across Lohas Hanji, a company that produces fabric and threads made with Korean paper. With the backing of her students, Park decided to begin designing clothes using Korean paper.

“At the 2008 Esmod general meeting, I presented a piece of fabric made from hanji to the other directors, and the reaction was very good,” Park said. “It was surprising to the others that the fabric had been made from traditional Korean paper, yet it was also environmentally friendly.”

Galvanized by the favorable reaction at the general meeting, Park quickly moved on to her next goal, spearheading an effort to bring together Esmod branches to design clothes made with hanji fabric.

The core of the project involved educating the masses in the fashion world about the high quality of hanji fabric. Park believed that in order to make hanji fabric a sought-after commodity in the global market, it was important to provide designers from various countries with the opportunity to touch and use it to design their own clothes.

The project started in November 2008, bearing fruit late last month and again several weeks ago with the large-scale exhibitions at Kring and Jeonju City Hall.

Hanji has been around for thousands of years and was once used in a variety of ways on a daily basis, serving not only as the preferred canvas for writers and painters but also in screens, doors and floor coverings in hanok, or traditional homes.

But the idea of using thin strips of hanji to make fabric dates back to just 2004, according to Kim Jin-hye, the director of the annual Wonju Hanji Festival.

The paper’s biggest strength in terms of fashion is its durability.

Despite being made from paper, hanji fabric can withstand more than 20 washes without any changes to its original structure. Hanji can last for up to 1,000 years, according to the Hanji Development Institute, and its strength and durability were certified in October 2002 by the International Organization for Standardization.

According to the experts, the durability of hanji is said to derive from the unique manufacturing process.

To make the paper, mulberry trees are stripped of their bark in late autumn. The bark is then boiled and later cooled in cold water. It is then pounded repeatedly and laid out to dry.

Hanji fabric is made by cutting the dried bark into long, thinly cut pieces, which are then twisted to make strings. The strings are combined with threads of cotton, silk or wool and then placed in a textile doubling or twisting machine, where they are woven together into strands that are just one to four millimeters (0.16 inch) thick.

Aside from durability, the fabric has several other advantages over its counterparts, its backers say. For example, hanji material helps prevent mold and harmful bacillus from forming, which was the primary reason that hanji fabric has been used to produce underwear and children’s clothing.

Esmod Seoul’s latest effort is taking that notion a step further by designing everyday clothing that can be worn by the public on a daily basis. The school’s global network has also helped implement modernity and practical usage into the mix.

“These clothes are a great way to help preserve an aspect of Korea’s heritage, and they are also well suited to the new environmentally conscious society,” Kim said.

Getting to know Korea

Students from the Esmod schools in various countries that participated in the fashion shows had differing reactions to using hanji fabric in their designs.

Some cited several drawbacks, among them the relative stiffness of the material and the fact that it can be difficult to iron the fabric, as it requires the utmost care.

However, many students were impressed with hanji material in general and said it gave them an interest in Korea and its traditional culture.

“I was surprised by the lack of color change in the hanji fabric over time, among other positive attributes,” stated Kashua Genji, a third-year student at the Esmod in Osaka, Japan. “It is especially useful for adding volume and adding effects to designs.”

Genji went on to state that she intends on using hanji fabric to design all three of her works for the upcoming Kobe Fashion Contest.

Other students commented on everything from how easy it is to dye to hanji fabric’s high quality.

“I was impressed,” Pulan said, “with the elegant and light feel of the hanji and silk fabric.”