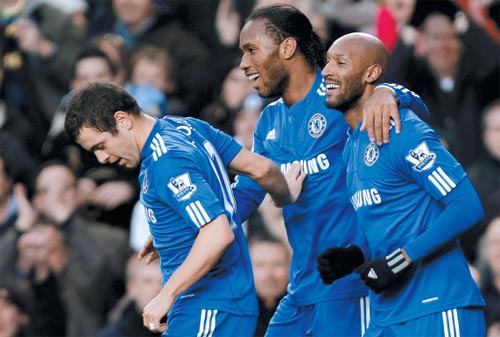 
LONDON - Ricardo Carvalho has told his Chelsea teammates they must work together and maintain a solid front in Wednesday’s clash against Portsmouth to avoid any more of the costly blunders that threaten to derail their title challenge.

After moving five points clear at the top of the Premier League on the back of five successive clean sheets, culminating in a ruthless 3-0 win at Arsenal late last month, the previously impenetrable Chelsea defense has been leaking goals at an alarming rate.

Carlo Ancelotti’s rear guard has been breached 10 times in four games in all competitions, with Everton taking advantage of more sloppy play by Carvalho, John Terry, Petr Cech and others in Saturday’s 3-3 draw.

While Manchester United’s defeat against Aston Villa allowed Chelsea to extend their lead over the champions to three points, there is a growing sense of unease over the chaotic nature of the league leaders’ defense in recent weeks. Those goals were the first conceded by Chelsea at home in the league since the opening day of the season, but the jeers that echoed around the stands at Stamford Bridge over the weekend reflected a fear that Ancelotti’s men could blow a golden chance to win the title through a careless lack of concentration.

Czech Republic goalkeeper Petr Cech has come in for the most criticism, and his nervous displays have undoubtedly forced the back-four to defend too deep of late - giving opposition attackers the chance to force more mistakes. But Portugal center-back Carvalho, who should make his 200th appearance for Chelsea at the Bridge on Wednesday, insists the team is just going through a freakish patch of bad luck where every error is punished by a goal.

“Right now every mistake we make, we concede a goal,” he said. “We are playing well but we have to be more compact, especially at free-kicks and corners.

“When someone makes a mistake you have to be there to help him. Against Everton one goal came from a throw-in and the other two from free-kicks. I think I am playing well, however I can’t enjoy it because we’re drawing or losing. I’m a little bit frustrated.”

If Chelsea could have hand-picked the opposition for a game they desperately need to win to steady their nerves, then rock-bottom Portsmouth would surely be on top of the list.

Pompey boss Avram Grant brings a team to Chelsea for the first time since being sacked by the Blues in the aftermath of the 2008 Champions League final defeat to United in Russia.

But for Terry’s penalty shoot-out slip in the Moscow rain, Grant would be a European champion and likely still Chelsea’s coach. Instead he is facing up to the prospect of a five-month struggle to keep Portsmouth in the top-flight against a background of financial uncertainty that has already seen the club fail to pay its players’ wages twice this season.

Portsmouth fans issued a vote of no confidence in the club’s board this week, but Grant can at least take heart from the determined way his side ground out a 1-1 draw at Sunderland on Saturday thanks to Younes Kaboul’s stoppage time equalizer. Grant believes surviving with Portsmouth is a far greater challenge than his task of steadying the ship when he succeeded Jose Mourinho at Chelsea.

“At Chelsea I took over a team that was on the way down and the challenge was to bring them back to their winning ways, and we did it,” Grant said. “This is a different challenge, first to take the team away from the bottom and then for the future to make them an exciting team.

“The challenge is bigger here because there are so many problems. Everybody said to me when I was offered it not to take the job, but that made me even more eager to take it.”