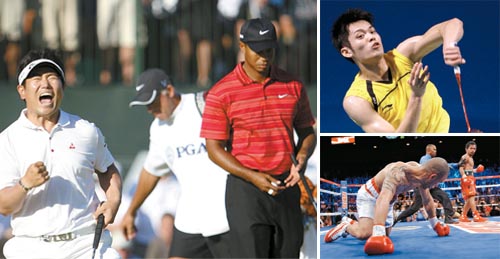 Clockwise from left: Yang Yong-eun celebrates a birdie putt as Tiger Woods walks to his ball mark during the final round of the 91st PGA Championship on Aug. 16; Manny Pacquiao is directed to his corner after knocking down Miguel Cotto in the fourth round of their WBO welterweight title bout on Nov. 14; Lin Dan returns the shuttlecock at the men’s badminton singles finals at the Hong Kong East Asian Games on Dec. 13. [AP]

SINGAPORE - Asia once again left its mark on the world sporting stage in 2009 as the region prepares for a bumper year of competition in 2010.

Among those making headlines was Filipino boxer Manny Pacquiao. A hero at home, he proved this year to be the best pound-for-pound fighter on the planet when he became the first man to win seven world titles in seven weight classes. His victory over Miguel Cotto in November set him up for a blockbuster showdown with Floyd Mayweather Jr. next year and followed up his stunning knockout in May of Ricky Hatton.

Another was South Korean golfer Yang Yong-Eun, who held off a surging Tiger Woods to become Asia’s first Major winner when he won the U.S. PGA Championship. China’s Lin Dan also wrote his name in the history books when he became the first shuttler to win a third successive men’s singles title at the World Badminton Championships. China dominated the event, winning four of the five trophies at stake - men’s singles and doubles, and women’s singles and doubles.

It all bodes well for next November, when China hosts the Asian Games in Guangzhou. Asia is also the venue for another big sports spectacle in 2010 when the Commonwealth Games come to New Delhi. Once again, the Asia-Pacific region played host to five Formula One Grand Prix events, with a sixth added next year when South Korea joins the circuit. But Asia’s influence took a huge hit with Honda and Toyota pulling out of the sport and Japanese tire manufacturer Bridgestone also quitting. All cited the tough economic conditions.

Some of the biggest names in sport also ventured to Asia, with Woods drawing huge crowds at the HSBC Champions in Shanghai and the Australian Masters in Melbourne. AFP