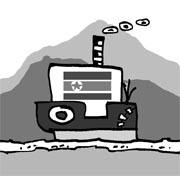 Japanese actor and director Takeshi Kitano’s film “Blood and Bones” shows vividly the heat of the day when permanent Korean residents in Japan left there for North Korea. Some among them might have felt their hearts full with the aspiration that they would soon join the “construction of the newly born socialist fatherland.” But many others had decided to go to the utterly strange land because they were deceived by the propaganda that anyone who could work would eat to their satisfaction, and that free education and free medical care would be provided. They believed that there would be no discrimination in the socialist fatherland of North Korea where all people were treated equal.

The reality inside North Korea was revealed only through letters. The letters, which were apparently censored, were all in praise of North Korea, “the paradise on earth,” and the great achievements of General Kim Il Sung. However, family members left in Japan read between the lines. And there were signs they mutually agreed: “If I send a letter written lengthwise, family members in Japan must come to North Korea as soon as possible, but if it is written horizontally, they should never come to the North.” Unfortunately, however, the letters the remaining family members received from the North were written horizontally. There was even a letter that read, “The life here is as affluent as the life in 000 in Japan.” The “000” in the letter was the geographical name of a slum area.

The North Korean government called it the “homecoming project”; the Pro-North Korean Residents’ League in Japan called it the “homecoming campaign”; the Japanese government called it a “repatriation matter”; and the South Korean government used to call it “repatriation to the North.” The South implied that the Korean residents in Japan did not return to their hometown on their own will, but were repatriated to the North by force. But I do not think this nomenclature genuinely represents the true nature of the project.

According to documents that are being discovered now, the move was closer to a large-scale fraud.

North Korea, the Pro-North Korean Residents’ League in Japan and the Japanese government participated in it respectively as the principal offender, an accessory and an accomplice. North Korea and the Pro-North Korean Residents’ League in Japan wanted to propagate the superiority of the North Korean regime. And the Japanese government wanted to “clean up” the pro-North Korean residents, a potentially dangerous group that had a high crime rate and was inclined toward leftist ideology. The South Korean government, which could not do anything under the circumstances, played more or less the role of a spectator. Who would compensate the twisted lives of 93,000 people who were induced to the fake paradise on earth and eventually driven to fall into hell?