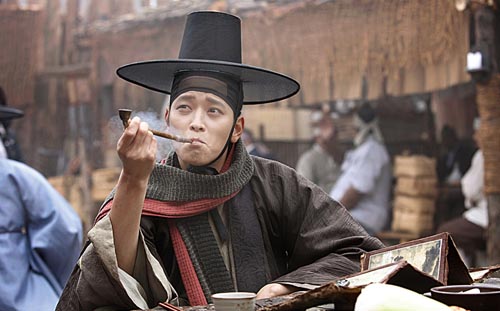 Gang Dong-won plays the lead role in the movie “Jeon Woo Chi: The Taoist Wizard,” the first motion picture made about the legendary Korean character. Provided by Zip Cinema

“Jeon Woo Chi: The Taoist Wizard” opens in the year of 1509 as evil goblins rampage through the country’s villages, killing and stealing after a spell binding them is broken by mistake.

Amid the chaos, Jeon Woo Chi, a notorious Taoist magician legendary for the countless pranks he played upon government officials and even the king, is wrongly accused of murdering his master and becomes sealed inside an ancient painting.

Jumping ahead to year 2009, a trio of Taoist wizards - two disguised as fortune tellers and one as a Catholic priest - is forced out of retirement to release the mischievous magician from his entrapment as the goblins reappear, wreaking havoc against the backdrop of modern Korean society. The anti-hero, however, appears nonchalant about the grave situation and is more interested in sightseeing and womanizing in modern day Korea.

Inspired by Korean folktale “The Tale of Jeon Woo-chi,” which spread by word of mouth in the Joseon Dynasty (1392-1910), the film’s director says he aimed to create a character comparable to Hollywood’s Superman or Spider-Man. The movie is the first motion picture made about the legendary character.

“Jeon Woo Chi is an anti-hero who is more interested in using his talent to cheat people and earn fame than saving society,” director Choi Dong-hoon said during the movie’s Seoul preview. “He was such an interesting character I wondered why no one thought of making a film about him before.”

A name that must at least be vaguely familiar to Korean history buffs, Jeon Woo Chi is indeed an intriguing character who represented the Joseon Dynasty peoples’ discontent with stern Neo-Confucian rules and corrupt administrative officials. Unlike other legendary heroes, Jeon Woo Chi is also a “realistic” character who was short-tempered, liked drinking and women, and wanted to show off his magic skills.

Though perhaps little-known outside Korea, Choi is considered one of the most talented and sharp-sighted filmmakers here as the creator of “The War of Flower” (2006) and “The Big Swindle” (2004). The War of Flower, which drew an audience of 7 million locally, received three top local awards including best scenario at the Korea Film Awards.

Leaping from the ancient to modern, fantasy to reality, the movie appears to have enough to offer foreign audiences, blending Taoist martial arts and black magic with real aspects of contemporary Seoul.

The actors and actresses also do a superb job of breathing life into the fictional characters - which even include a man-turned-puppy - wrapping the somewhat complicated plot up in a humorous outfit.

Actor Gang Dong-won, the hero of “Duelist” (2005) and “M” (2007), turns Jeon Woo Chi into one of the most stylish and charming heroes in the history of Korean film, with his face full of mischief as he fights off the goblins with the tips of his fingers.

With a production cost of some 10 billion won ($8.6 million), “Jeon Woo Chi” has already been sold to 13 countries, including Germany, England, China and Singapore, ahead of its local release.

Jeon Woo Chi: The Taoist Wizard will hit local theaters on Dec. 23 and will be released overseas beginning January. Yonhap