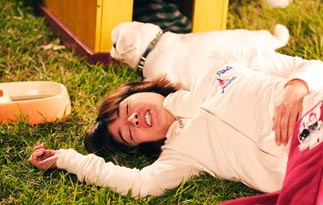 Song-i (Kang Hye-jung) shares an unexpected friendship with the two women who are in love with her boyfriend in the movie “Girlfriends.” Provided by Film Company Aram

She might not be the prettiest or even the most talented actress in South Korea, but Kang Hye-jung is clearly one in a million when it comes to the effort and energy she puts into her profession.

From the plucky heroine in the Cannes award-winning “Oldboy” (2003) to the mentally challenged girl in “Welcome to Dongmakgol” (2005), Kang has taken on so many different roles in the past decade that her acting career already seems full and complete at the young age of 27. This year alone, Kang has starred in four movies, wasting no time in expanding her vast filmography. In “Girlfriends,” the most recent of Kang’s movies to be released this year, the actress again gives her best, managing to turn a plain romantic comedy into something worth watching - if only barely.

Song-i, played by Kang, is a 29-year-old city girl still in search of the man of her dreams. When Gong-yu (Bae Soo-bin), a handsome and seemingly good-natured colleague at work, confesses his long-hidden feelings for her, Song-i begins to think her ordinary life might turn out to be exciting after all - until she meets Se-jin (Han Chae-young) and Bo-ra (Heo I-jae), two attractive women who say they are also in love with her boyfriend.

Angry and heartbroken, Song-i attempts to end it with Gong-yu, but is confused when he persuades her to change her mind in an earnest, tearful plea. Hoping to solve the mystery of why this “heartless three-timer” doesn’t seem like such a bad guy at all, Song-i decides to approach the two women and begins to feel an unexpected compassion and empathy toward them.

Inspired by a 2007 local award-winning novel with the same title, “Girlfriends” blends elements well-tested in South Korean romantic comedies, but the mixture fails to produce anything that feels new. The movie does a lackluster job of capturing the essence of the amusing friendship between three women in love with the same man, leaving too many gaps for audiences to fill in by themselves.

Kang, however, still manages to shine, provoking laughter as she fumes, tumbles and cries in frustration. By breathing life into her willowy character, she nearly succeeds at making this outlandish situation believable. The energy Kang puts into even the most unlikely movies shows why she remains at the top of South Korea’s entertainment ladder despite poor box-office results from her recent films.