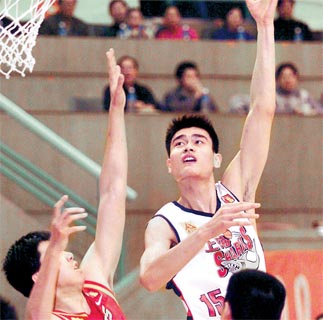 BEIJING - Chinese basketball superstar Yao Ming may be sidelined this NBA season with an injury, but as the new owner of the Shanghai Sharks, he is aiming to bring a CBA championship back to his hometown.

This summer, the All-Star Houston Rocket center bought the club he led to the 2002 China Basketball Association title and will on Saturday make his CBA homecoming when Shanghai opens the season against the Zhejiang Lions.

“I have meetings almost every day about the start of the season. I speak to the coach over there and the general manager,” Yao told the Houston Chronicle from his home in Texas. “It’s difficult. When I’m a player, to play on the court is tough, but to be the manager of a team is another story. It’s tough. I didn’t know that before.”

The two will team up with Shanghai star guard Liu Wei, who last month had a headline-grabbing spat with Yao’s management team when he demanded more money or to be traded. Liu, who is also the starting guard on China’s national team, is one of the CBA’s best players and was on the 2002 championship squad with Yao.

Since departing to the NBA in 2003, China’s most recognizable sports star has continued to have an impact on the CBA with a steady stream of former teammates, known as the “Gang of Rockets,” coming to play in China. Besides Lucas, 30-year-old power forward Stromile Swift will this season play for the Shandong Huangjin, while Maurice Taylor has signed with the Shanxi Dragons. In previous seasons, other Rockets to show their skills in the CBA included NBA standout Bonzi Wells, Kirk Snyder, Gabe Muoneke and Mike Harris.

“Last season was the longest and most successful season in the league’s 15-year history,” Ma told reporters.

Due to player commitments to the just-completed East Asian Games in Hong Kong, the upcoming CBA season will be shortened to 32 games for each of the league’s 17 teams, down from last season’s 50-match schedule. Titleholders the Guangdong Tigers will look to defend their championship with former Los Angeles Laker Smush Parker and David Harrison, who once played for the Indiana Pacers, teaming up with the Tigers’ numerous national team players.

Although NBA commissioner David Stern said in October that the world’s top basketball league had suspended talks with the CBA on a potential jointly run league in China, the NBA continues to have a large presence here. Besides Donewald, former NBA All-Star Sidney Moncrief, who once served as assistant coach with the Golden State Warriors, has been named the head coach of the Beijing Ducks. AFP