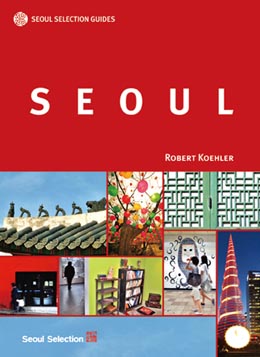 For being one of the largest metropolitan areas in the world, there are pitifully few travel guides written about Seoul.

A new book by veteran expat Robert Koehler attempts to remedy that. And at 464 pages, “Seoul” is by far the largest English-language guidebook yet on the city.

The book is broken into two halves - the first dealing with neighborhoods of Seoul and daytrips outside of the city, and the second dealing with the nitty-gritty details of shopping, accommodations, museums and transportation.

Many expats may be familiar with Koehler from his blog The Marmot’s Hole, where he writes about Korean news and pop culture. Koehler is also the executive editor of the lifestyle magazine Seoul, published by the bookstore Seoul Selection.

He has lived in Seoul for over a decade, which is evident from his vast knowledge of oft-overlooked historical sites and insider tips (such as when in Icheon shopping for ceramics, get a taxi driver’s business card because it’s often hard to find taxis on the street).

Seoul is brimming with luscious color photos, a rarity in travel guides. I really got a good sense of what each attraction was like from the photos, and the book was a visual treat to read. The photo dictionary to Korean dishes near the end of the guide is reminiscent of Eyewitness travel books and comforting for the culinary timid.

As with Seoul magazine, this guide stands out for its use of maps. The city’s address system is enough to make any newcomer’s head spin, so the well-designed maps complete with drawings of buildings and an easy-to-follow key are extremely helpful.

As a hiker, I also found the mountain section to be a great introduction to the various trails, temples and fortresses on the five main mountains of Seoul.

Unfortunately, the guide falls short in the restaurant section. Most tour guides follow a standard format when it comes to restaurant reviews. They list the type of food served at the restaurant, the address, hours and telephone number, the rough price of dishes and whether vegetarian items are available. If you’re lucky, some guidebooks will even tell you if there is English spoken in or on the menu of the restaurant.

But Koehler’s Seoul seems to throw this rubric out the window. The end of each neighborhood chapter features a two-page spread on “Places to Eat.” Koehler lists a dozen or two restaurants with brief (sometimes snarky) anecdotes such as this one for Re in Seodaemun: “Possibly the only venue in Seoul where you can sit in a tent, pitched indoors, while drinking wine while listening to reggae. The bar is also associated with efforts to help Tibet - as if that wasn’t obvious.”

The descriptions include the restaurant’s phone number and where to find them on the guide’s map. But the lack of price guides, veggie-friendliness and hours on the restaurant listings made it difficult to go off book recommendations alone. For instance, with Re, I’m not sure what sort of food they serve, let alone how much said food and wine will set me back.

In the end, Seoul serves best as a coffee-table book for expats rather than a utilitarian, first-timer’s guide to the city.

Without an index page, the book lends itself to a leisurely thumbing through and not the down-and-dirty information hunt often necessary on trips.

And given the book’s weight and stocky dimensions, I found myself tearing out the pages to take along with me rather than dragging the entire book along.

That’s a shame, because it really is a pretty book.