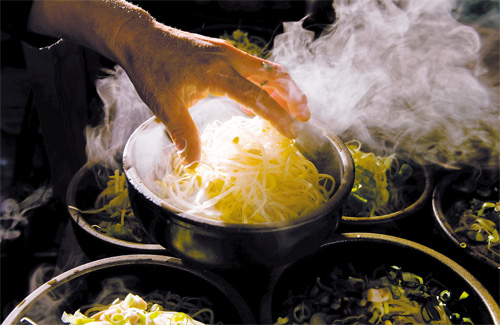 Gukbap (rice in soup) made from gongnamul (or bean sprouts) is said to be good for a morning hangover. By Kwon Hyuk-jae


The revelry that helps to ring in the year’s end can also lead to all-night drinking binges.

While all of that celebrating may bring you closer to your colleagues or help you forget your sorrows for a night, the consequences can come on the next morning in the form of a hangover, served possibly with a side of cold regret.

On days like those, what’s important is not how much you drank, but what you can do to alleviate your pain.

Each country seems to have its own hangover remedy. Japan has ramen and Russia has cucumber juice. In Sichuan, China, they eat carp soup, and in Guangdong Province in China, wonton mein is the ticket.

In South Korea, the answer is haejangguk, which refers to any soup eaten to relieve a hangover. There are many different variations on the soup throughout the country, and each province has its own version. The word haejang actually means to detoxify, and this healthy soup certainly gets the job done.

Of course, many people also have their own ideas for how best to re-energize after a long night of drinking.

For 49-year old Hanhwa Eagles baseball coach Han Dae-hwa, drinking four bottles of soju is a given. During his early coaching years, he used to drink a lot more, but would come to practice completely sober the next day. His secret hangover helper? Blowfish soup. “I’ve been eating it since I was in my 20s, so it’s very effective for me,” Han said.

Gu Bon-gil, the chef and vice-dean of the hotel department at the Korea Technical College, says the best way to banish a hangover is haejangguk made from daseulgi (black snail). The dish is made with fermented soybean paste, black snails and chard.

“The black snails give the broth a refreshing taste that wakes you up immediately,” Gu said. “It also helps settle an upset stomach.”

The tasty black snails are actually very nutritious and rich in amino acids, so the soup helps people recover from hangovers and even get over colds.

“Hangovers set in after the alcohol changes into acetaldehyde,” said Lim Myeong-jin, the director of Mi-green Oriental Medicine Clinic. “The detoxification process takes a while, so it’s actually more effective to eat haejangguk after you wake up rather than eating it right after you drink.”

He also recommended that people avoid drinking on an empty stomach, which could do some major damage to the stomach lining.

“It’s really important to eat something, whether it’s a snack or something high in sugar before you drink alcohol,” Lim said. “Start with the beverages that have the lowest alcohol content and maybe one drink that’s really strong. If you do drink excessively, it’s also important to take two to three days to rest and recover.” 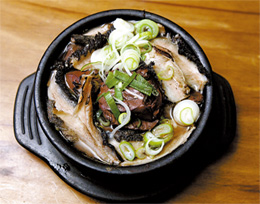 This hearty soup originated in Gyeongju, North Gyeongsang, where it is topped with buckwheat jelly or paste. Without the jelly, the dish is similar to the haejangguk from Jeonju, which is made with bean sprouts. As you step in to the Palujeong Haejangguk restaurant in Gyeongju, the smell of a variety of seaweeds and gulfweeds is fragrant. The soup is made with dried pollack, shrimp, anchovies and kelp, but what makes this dish special is the buckwheat paste. The combination of sesame oil and kimchi that is mixed into the paste gives it a slightly bitter yet light taste. 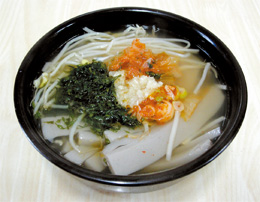 There are two kinds of gukbap with bean sprouts in Jeonju: the warm “Waengijip” variety and the piping hot “Sambaekjip” variety. Both of these use salted shrimp seasoning and are warm enough for any winter day. The broth for the Waengijip gukbap is made by boiling dried pollack, dried shrimp, anchovies, kelp and radishes. A poached egg, seaweed and three more spoonfuls of broth are mixed in, which helps protect the walls of the stomach. The Sambaekjip gukbap broth is made by boiling rice and bean sprouts, to which eggs, chili peppers, red pepper powder and powdered sesame mixed with salt are added. 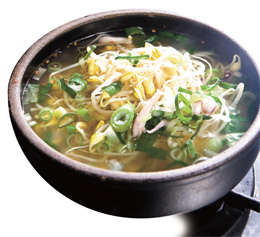 Seoul’s CheongJinok restaurant has a 72-year history and is famous for its Seonjitguk. They have relocated and are on the first floor of the Le Meilleur Building on Jongno 1-ga in central Seoul. Beef brisket and beef leg bone are boiled into a broth and mixed with dried kimchi, bean sprouts and ox blood. While this dish is usually served slightly warm, more people now ask for it to be served boiling hot.

Olgaengiguk is made with fermented soybean broth, red pepper paste and red pepper powder. Cooked olgaengi are coated with flour and eggs, and then put into the boiling mixture. 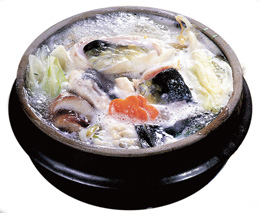 One restaurant that is known for its Olgaengiguk is Seoul Sikdang. What makes it so famous?

“The olgaengi are fresh and brought directly from the Namhan River,” said Park In-seok, the owner of Seoul Sikdang.

Goesan olgaengiguk is similar to the daseulgi haejangguk made in the Chungcheong provinces. The version made in Goesan County, North Chungcheong, is particularly well-known.

While it takes time to clean and prepare the fish in this dish, the cooking method is pretty simple and straightforward. At Geumsubokguk restaurant in Busan, the broth for this soup is made with water, bean sprouts and radishes. After the blowfish is added to the boiling mixture, the dish is then topped off with dropwort, a leafy green herb.

This soup is made with simple ingredients that include corbicula, salt and chives. Corbicula helps with overcoming fatigue and improving vision, and it is also improves organ function and cleanses the stomach.

Corbicula cannot survive in water that is not clean, so the clean water near the Seomjin River in Hadong County, South Gyeongsang, is ideal for corbicula growth, and has made the area famous for this its Jaecheopguk.

“The ingredients are simple and easy to cook with and salt is the only seasoning that’s used,” said Ye Gui-sun, the owner of Yeoyeo Sikdang. “That may leave a slight hint of fishiness, but that’s what makes this soup what it is.”