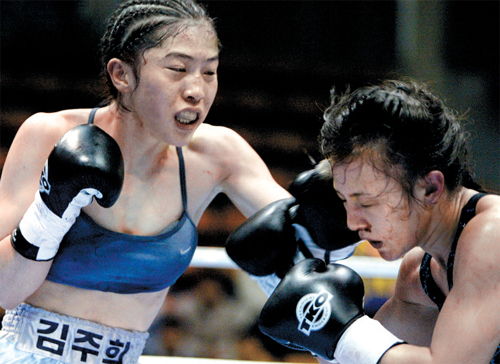 At 23, Kim Joo-hee is already an accomplished boxer, having taken all five world title belts in her division.

And 2009 was especially meaningful for Kim, who is known for her pretty face as much as her aggressive attitude. In May, in a title bout for the Women’s International Boxing Federation, the Women’s International Boxing Association and the Global Boxing Union in Anyang, Gyeonggi, against Papratan Luksaikong of Thailand, Kim scored a fourth-round technical knockout, becoming the first ever female boxer to take all five world titles.

For that feat, the WIBA and the WIBF named Kim Fighter of the Year, and GBU also gave her its top honor on Nov. 4.

At an interview at the Geoin Boxing Gym in Munrae-dong, western Seoul recently, Kim showed herself not just a world-class fighter but a determined young lady with serious ambitions.

Coming from an underprivileged family, Kim entered boxing by chance while in middle school in 1999, when she would follow her sister, four years her senior, to her part-time job at a gas station. Kim often waited at the boxing gym next door for her sister to finish her shift. As Jung Moon-ho, WIBA Trainer of the Year and manager of the gym, tells it, he saw the young Kim playfully going through the motions and noticed something in the kid.

“I saw Kim hitting the heavy bag for the first time and immediately saw something special in her,” Jung explained.

“Female boxing was nonexistent in Korea at the time but was already drawing huge interest in Japan. I steered Kim toward thinking about a professional career in the sport.”

Success didn’t come right away. Kim lost her first title bout, a flyweight Korean title fight against Lee In-young in 2002. But afterward, Kim went on to streak of 13 wins, six by knockout, and one tie.

She earned her first world title, an International Females Boxers Association junior flyweight championship, against Melissa Shaffer of the United States, and in the process became the youngest world champion in female professional boxing at the age of 18 years and 11 months.

In 2007 came the World Boxing Association title, and a WIBA title in the following year. She collected the remaining three earlier this year in Anyang.

“Defending my titles is tough work, but I want to continue. I also want to move down a weight class and try my hand at unifying the titles in the mini flyweight division next year,” said Kim.

Kim’s success in the ring came from a combination of hard work and a winning attitude.

“When I get hit in the ring, it obviously hurts. But I don’t have time to worry about pain. I am already thinking about countering my opponent with double the number of shots that I just got tagged with,” Kim said.

Jung describes Kim as a tireless workhorse who took off a cast and went back to skipping rope after major surgery on her right big toe before the injury had fully healed.

Kim starts her day without fail with two-and-a-half hours of roadwork at 5:30 a.m. She runs 15 to 18 kilometers (9 to 11 miles) a day. She lifts weights during the day and finishes with more technical training at the gym.

While other female boxers often hold down side jobs to get by, Kim is fixated on the sport of boxing, devoting her entire life to the sport.

She’s been taking yoga for five years and also swims, but the purpose of these activities is to improve her flexibility and strengthen her back for competition in the ring.

Kim’s fight purse is 50 million won ($43,200) per fight, but due to her injury, Kim could not compete in many fights this year. Take away the commission fees and expenses and she’s left with about half of the money. She even lost a sponsorship from a sporting goods company recently.

“I don’t make a whole lot of money in the ring. But I fight to provide for my father, who’s showing early signs of Alzheimer’s disease. It’s my responsibility as the head of the family,” Kim said.

Despite her age, Kim does not get much chance to dress up or do things most twenty-year-olds do.

“To be honest, I dressed up a bit for this interview. I usually dress in track suits,” said Kim with a laugh. “I want to do some of the things my friends do, but I have a passion for the sport of boxing and think it would be a waste of time to concern myself with such things.”

As Kim said, she doesn’t have any time to concern herself with some of the luxuries others her age can afford. She sleeps an average of two to three hours so that she can study English and prepare to test for her amateur instructor’s license after training.

And Kim’s already busy lifestyle is showing no signs of slowing down. She is set to enroll to receive a master’s degree in education at Joongbu University next year.

With female boxing included as an official sport at the 2012 London Olympics, Kim has hopes of someday becoming a coach and even doing some broadcast work.