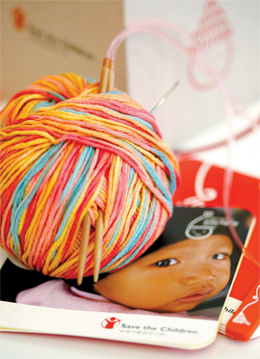 Save the Children’s Knit a Cap Campaign, left, was so successful in Korea that the organization is doing it again for a third year this year.

When strolling around Seoul this time of year, it’s not uncommon to see people out raising money for a good cause - some people play guitars to catch the public’s attention and others hand out flyers that detail the difficulties they face. The Salvation Army is also out there with their red kettles.

Fund-raising efforts like these are not new, but they are relatively new to Korea, which until recently was a nation without a culture of giving.

Nonprofit organizations in Korea are changing their fund-raising strategies to attract potential donors, and they are getting help from a new school that specializes in the fine art of fund-raising. The classes at the school teach the students - who range from employees at nonprofit organizations to people from religious groups to interested individuals - how to use marketing principles, public relations techniques and information technology to get their message across, while also showing them how to build lasting relationships with donors.

Meanwhile, as the interest in charitable giving gains momentum here, international nongovernmental organizations with branches in Korea are beginning to take notice.

Groups such as Amnesty International and Save the Children, which have built global human rights campaigns and launched several successful fund-raising initiatives, are putting their fund-raising expertise toward the creation of campaigns that will appeal to the sensibilities of the Korean public.

Taken together, these efforts have changed the culture of charitable giving in Korea and sparked a new spirit of giving that is spreading around the nation.

As many nonprofit organizations know, there is an art to raising money.

At the Fund-raising School, the first of its kind in Korea, it is more like a science. The school borrows from the fields of marketing and public relations to get its students to think of fund-raising as a strategic tool that can be used to serve their larger goals.

The Venerable Seongkong, head of the Jinju Community Rehabilitation Center in Jinju, South Gyeongsang, is one of the 53 students enrolled in a course at the Fund-raising School in Pyeongchang-dong, Jongno District, central Seoul. The one-way trip from Jinju to Seoul takes nearly five hours, but he has not missed a single class in the last 10 weeks.

“Thanks to these classes, I’ve learned that fund-raising is not begging for money from others but involves many skills such as marketing, building relationships and many other techniques,” said the monk, who is in his 50s. “This is only the second course for the school, but if the school produces more graduates in the near future, I think Korea will become a different place because more donations will contribute to the creation of a better world.”

Of the school’s 53 students, 22 people work at nonprofit organizations, and the other 31 have diverse backgrounds. Some belong to educational and religious groups, and others are self-employed or are salaried workers.

The registration fee for the 10-week course, which has classes every Wednesday, is 1 million won ($850), according to May Lee, a managing director at the Hope Institute, which co-organized the Fund-raising School in conjunction with the Beautiful Foundation, a local nonprofit organization.

Yang Keum-ju, another student at the school, even flies from Jeju Island to Seoul to participate in classes.

Over the last 10 weeks, the classes have touched upon diverse subjects ranging from tax laws to the development of new donation channels through the use of information technology, analysis of donor types, building a donor base and developing long-term relationships with donors. 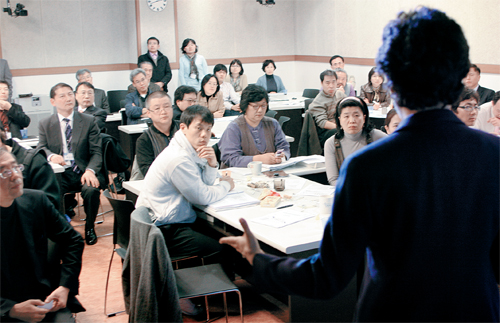 At Fund-raising School, students learn techniques that help them promote their cause. Provided by the companies

“One surefire to win the hearts of potential donors is through regular presentations on Web sites,” said Lee Won-gyu, vice president of Doum and Nanum, which means helping and sharing in Korean, a marketing firm for nonprofit organizations.

During the ten-week session, the students divided into six groups, set donation targets and raised funds for two weeks. The students shared their results during a five-hour presentation on Dec. 9, the last day of class. 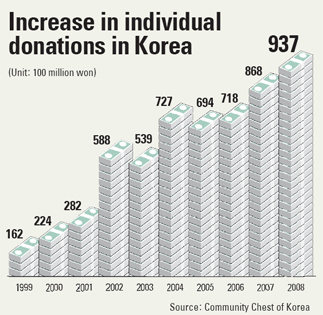 One group led by Lee Hee-kwan, man in 40s who works for a local IT firm, raised relocation funds for a community center for underprivileged teenagers located in the Songpa District in eastern Seoul that is scheduled for demolition next year.

“Every PC cafe chain has their own Internet Web site, so I persuaded one Internet cafe chain owner to let me run a banner ad about our cause on the main page. He has 20 PC cafes, which means his banner ad was seen by more than 200 people a day at least,” said Lee.

Lee’s group also saw the potential of using local Internet search giant Naver, which has a market share of more than 70 percent, as a channel for donations.

The search engine operates a fund-raising program called Happy Bean. Whenever a Naver user writes a post or sends an e-mail message, the user earns a bean worth 100 won. The beans can later be given to a charitable organization and Naver provides the money for the contribution.

“About 4,000 nonprofit groups compete with one another to receive beans from Internet users at Naver,” Lee said. “It’s a tough game, but we realized that many people don’t know how to donate their beans because it’s pretty complicated.”

To educate the public about the use of the beans, Lee’s group made a video for dissemination on the site, and directed potential donors to their Web address by including it in the video clip.

“We thought that the people who want to donate their beans but don’t know how to would be interested in our Web address,” Lee said.

Using these and other methods, Lee’s group raised 8,980,000 won in two weeks. The five other groups also raised around 10 million won each.

Lee’s group earned praise from his five advisors including Park Won-soon, the founder of the Fund-raising School, for making use of the marketing skills they learned at the school.

Park, who is also a founder of the Beautiful Foundation, says the idea of opening a school that teaches the art of fund-raising was not welcome at first.

“Everyone said it was going to fail, but I believed that Korea was ready to take fund-raising seriously and that this kind of school was needed,” Park said.

As Park said, Korea has progressed a lot in its culture of charitable giving.

Despite the global financial crisis, the Community Chest of Korea said the total amount of contributions from individual donors was 93.7 billion won in 2008, which is a huge increase from the 16.2 billion won received in 1999.

“Looking back on the past 10 years, Korea has seen an increase in the number of individual donors. In addition, the tax laws have changed to facilitate donations,” said Kim Hyo-jin, head of the public relations team at the Community Chest of Korea.

With more people interested in donating money, and looking for easier ways to do so, charities and nonprofit organizations have begun to offer alternatives to the traditional cash donations.

“What we do is develop many donation programs so that people can donate based on their interests and convenience,” said Jeon Heung-yoon, the head of the fund-raising department at the Community Chest of Korea.

For example, people are able to donate the mileage points from their credit cards. At convenience stores, they can purchase snacks or other beverages with the Community Chest of Korea symbol, with a certain percentage of the money raised going to the organization, which then allocates the funds to help people in need.

After witnessing the success of some nonprofits in Korea to raise funds, many global nonprofit organizations have begun recruiting more supporters in Korea using a diverse range of marketing techniques.

Amnesty International Korea is one of these. The nonprofit organization, which is funded largely through membership fees and donations, adopted a face-to-face strategy and placed placards in the streets of downtown Seoul detailing what they do to advocate for human rights and why they are in need of supporters.

“We received advice from Doum and Nanum, and our membership has increased significantly with our face-to-face marketing strategy,” said Lee Ko-eun of Amnesty International Korea.

“After the tough years of industrialization, Koreans have started to express their concern for others by donating,” said Cho Heung-sik, a professor at Seoul National University.

Save the Children Korea also saw great success with its Knit a Cap Campaign, which began in November 2007. The campaign urges people to knit caps for newborns in third-world countries.

The caps help prevent babies from the deaths that can occur due to the huge temperature fluctuations between day and night.

About 40,000 Koreans have already participated in the campaign, which ran from November 2007 to March this year. It was so successful that the organization recently launched a third campaign.

“I think people love the feeling of helping someone by taking the time to knit the caps instead of just giving money,” said Jin Mo-yeon, an official at the Save the Children Korea.

The organization’s online shop, where people can purchase aid items such as mosquito nets or blankets, is generating a positive response from individual donors.

With 1,000 won, anyone can help children in African countries by purchasing albendazole, which stops the spread of certain diseases such as malaria, by donating money to send the drug via Save the Children Korea.

According to Lee of Doum and Nanum, Save the Children Korea is an excellent fund-raiser.

“What we do is offer people a chance to use their money in ways of which they can be proud,” said Lee.