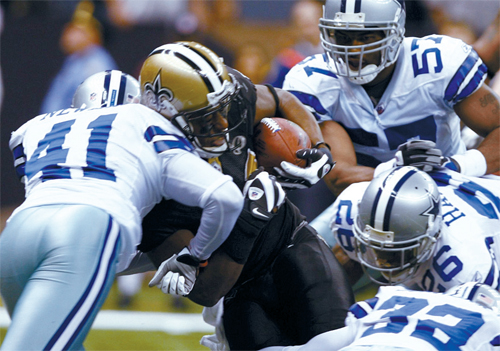 Running back Mike Bell (#21) of the New Orleans Saints rushes with the ball against the Dallas Cowboys at the Louisiana Superdome on Saturday. [AFP]

NEW ORLEANS - The New Orleans Saints’ shot at a perfect NFL season ended Saturday when they were beaten by the Dallas Cowboys.

The Saints suffered their first defeat of the season 24-17 after 13 successive wins, leaving the Indianapolis Colts, 14-0 after a win on Thursday, the only remaining team with a chance of completing a perfect campaign.

New Orleans trailed 24-3 going into the fourth quarter, then scored two touchdowns. After Dallas kicker Nick Folk watched his 24-yard field goal attempt clang off the right upright shortly before the two-minute warning, Saints quarterback Drew Brees had an unexpected chance to drive the team downfield for a tying score.

Brees moved the Saints into Dallas territory. But on second down, Ware sacked Brees and forced a fumble that was recovered by the Cowboys with 6 seconds left, ending the contest.

Romo passed for 312 yards, and Ware returned from a neck injury to be part of a relentless Dallas pass rush that pressured Brees all night.

Marion Barber had two short touchdown runs for the Cowboys, who boosted their playoff chances. They’ll hold on to a wild card spot for at least another week.

The Saints did not score a touchdown until Mike Bell’s 1-yard run with 12:35 to go. Brees followed by capping a seven-play, 70-yard drive with a 7-yard touchdown pass to Lance Moore with 8 minutes left, cutting New Orleans’ deficit to 24-17.

That left it up to the Saints’ defense to hold once more. Dallas faced a third-and-7 on its own 23 and the New Orleans crowd was so loud that Romo had to call timeout a moment before the play clock expired.

However, Romo found Miles Austin on a short crossing route for a 32-yard gain. On the next play, Romo spun away from the rush and passed to tight end John Phillips for a 23-yard gain to New Orleans’ 22.

That setup what looked to be a simple game-sealing field goal, but Folk’s kick bounced off the upright and the crowd erupted, sensing the Saints were simply destined not to lose. On the ensuing New Orleans possession Brees, on fourth down, threw a pass over the middle of the defense to Marques Colston, who made a one-handed catch.

The Saints marched to midfield in the final minute, but the Cowboys held firm. AP