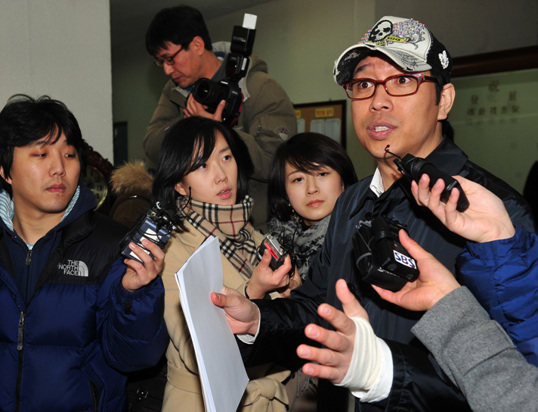 In the latest scandal involving the KBS hit action-drama "Iris", Kang Byung-kyu, 37, baseball pitcher-turned TV entertainer, said he is going to sue the producer of the drama for assault and blackmail.
.
Kang was accused of bringing in gangsters and causing a disturbance on the set of Iris in Songpa District, southern Seoul, at around 1 a.m. last Monday. He visited the set to protest to the producer whom Kang claims to have spread the rumor that he was behind the feud between Lee Byung-hun, a star of Iris, and his former girlfriend Kwon Mi-yeon.

Kwon has filed a lawsuit against Lee, saying he lured her into a sexual relationship under the false promises of marriage. Lee has denied the charge and pledged to file a lawsuit of his own, escalating the situation into a nasty legal battle.

Kang went to the police at around noon today for investigation into his alleged disturbance, but citing emotional pressure stemming from the presence of many journalists, he postponed his testimony.

Instead, he held a press conference, where he said it was the producer of Iris that called in the mob. Kang also characterized himself as the victim, claiming he was subject to a beating for about half an hour. He added that he will file the official complaint to the police soon.