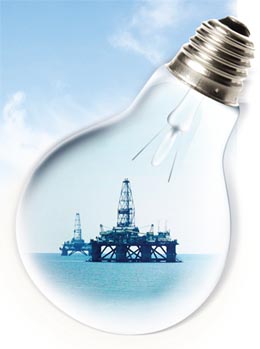 Since the global financial crisis that started last year, a silent war has been waged on all fronts - the war to secure energy resources. As numerous resource-rich nations began selling their mining areas to raise capital, other nations, including South Korea, have scrambled to take advantage of the low purchase prices and secure stakes in the mines.

Lee Yoon-ki, the team leader of the Energy and Mineral Resources Development Association of Korea, characterized the current situation as being “similar to the aftermath of the Asian financial crisis in 1997, when resources were sold at fire-sale prices and many developed countries competed for them.” 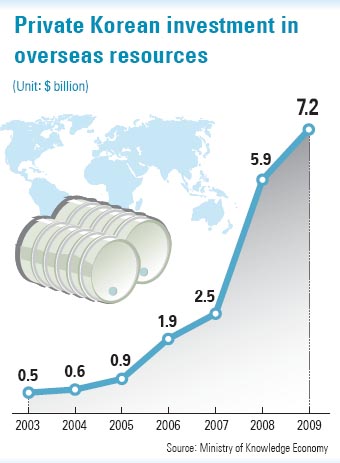 President Lee Myung-bak, who was once the chief executive officer of a large conglomerate and has since the beginning of his presidency emphasized the importance of natural resources, has seized the opportunity.

Many say that it is a logical path for a country with few natural resources of its own. South Korea ranks seventh in the world in terms of oil consumption, but has only secured a mere 0.09 percent of the world’s total oil reserves.

Kim Eun-seok, the head of foreign relations and security policy in the Office of the Prime Minister, has said that “South Korean corporations are way too small to secure resources from abroad, and it’s impossible for them to compete with other countries under the present conditions.”

To become competitive, these companies, including oil and gas and natural resources corporations, need to increase in size, he said.

The global trend is toward the purchase of mining areas that are known producers of natural resources, rather than the exploitation of new areas where success is not guaranteed. That is why South Korea is also switching from the usual “high risk, high return” procedure to a “low risk, low return” strategy that promises a steady resource supply.

Until now, a major barrier has been the cost of buying productive land, which was much higher than the cost of exploring new areas. But prices have dropped following the global financial crisis. Countries such as Kazakhstan are selling land that has proven to be productive in order to overcome their financial woes, and buyers like China are on a shopping spree.

According to analysts, China is considered the most aggressive buyer of productive land. Just this year, they spent between $20 billion and $30 billion to grant loans that will allow Chinese companies to take advantage of the land sales.

It would take 30 years for South Korea to acquire a comparable supply of resources by investing in overseas development.

Since he took office, President Lee has pushed for a policy of resource diplomacy, touring resource-rich countries to strengthen ties and facilitate bilateral cooperation for the natural resource industry.

Senior politicians and government officials have given him their full support. Both Lee Sang-deuk, a Grand National Party lawmaker who is also the older brother of President Lee Myung-bak, and Park Geun-hye, the former leader of the Grand National Party, have voiced their support of the policy, and former Prime Minister Han Seung-soo was even given the nickname of “resource minister” for his enthusiasm for the policy. Park Young-jun, the deputy head of state affairs, has also been a strong supporter of the president’s initiatives, and several South Korean diplomats have been eager to contribute to the effort.

There are currently 78 South Korean government agencies working in resource-rich countries including Cameroon, Congo, Kyrgyzstan and many more. Twenty-one of these agencies are working with local energy professionals to investigate the possibilities for natural resources development ventures in those countries as well as potential partnerships with private firms.

While the government supports the purchase of resource-related companies by providing needed information, it is private enterprises that are spearheading the effort to secure and develop new resource supplies.

In March of last year, 70 enterprises ranging from large conglomerates to small firms, including the Korea Oil and Gas Corporation, launched the Energy and Mineral Resources Development Association of Korea to further these efforts.

Cho Hyun, energy resources ambassador for the Ministry of Foreign Affairs and Trade, says that having a secure source of energy is vital in order to maintain stability even as the price of resources from overseas fluctuates and that relying heavily or even solely on the Middle East for South Korea’s oil supply is dangerous given the volatility in the region.

“It is inevitable that we will be vulnerable to price fluctuations as the South Korean economy grows. That is why it is just as important that we expand the number of countries from which we are able to secure resources,” Cho said.

That is why South Korea has been turning toward Central Asia and Africa as potential suppliers of natural resources.

Analysts say that the current situation calls for further investment in either the purchase of productive mining areas or the promotion of mergers and acquisitions with existing companies in order to focus the effort on the resource supply rather than on the profit margin.

Currently, the Korea Oil Corporation is extremely active in these areas. Last October, it acquired Harvest Energy Trust in Canada for $3 billion.

“The merit of engaging in an M&A with a certain country is that we not only acquire its resources but also its technology,” explained Lee Yoon-ki, the team leader of the Energy and Mineral Resources Development Association of Korea.

That strategy already seems to have bolstered the country’s natural resource assets.

South Korea’s stores of crude oil and gas tripled from 2.8 percent in 2002 to 8.1 percent this year. Meanwhile, the country’s supply of strategic minerals, including uranium and nickel, have increased 7.4 percentage points from 18.5 percent in 2007 to 25.9 percent in June this year.

In the one and a half years since Lee Myung-bak took office, the ratio between the amount of natural resources the country uses versus the amount it is able to produce on its own has increased by 7.4 times what it was during Roh Moo-hyun’s five years in office.

But the country’s known pursuit of natural resource supplies has also backfired. One source, who asked not to be named, said that the “rumors that South Korea is putting a strong emphasis on securing resources have caused other countries to raise their prices or go beyond the usual price tag, for example, for an investment in a social overhead capital project.”

Most resource-rich countries are strongly influenced by their own governments, said brothers Gwak Young-deuk and Gwak Young-chun, who together run a business called Dasom Indonesia that develops bituminous coal for use in thermal power stations. This means it is crucial for a company to use their personal connections with local companies wisely.

Unlike workers from large conglomerates who work in an area for two to three years and are then moved into other areas, workers from small enterprises tend to put down roots in one country. This gives small enterprises an advantage over larger corporations because they have built active relationships with people and businesses in the local communities in which they are doing business.

“It’s impossible to seek exploration or development rights at any site without a local network,” CEO Kwon Oh-suk of KSR, a company exploring oil fields in Kazakhstan, said. “We took a risk, entered the wild and built strong relationships with the locals there,” the Gwak brothers said. “Sadly, many of the large companies from Korea who refused to invest in our company failed to sign contracts with the locals due to their inability to understand the local culture,” they added.

However, the main obstacle for small enterprises in the exploration and development of resources in countries overseas is financing. The brothers both say that even though they have succeeded in locating promising sites, it has been hard for them to secure loans since the banking industry in Korea is unfamiliar with the oil business and is therefore reluctant to finance oil-related projects.

The Gwak brothers thought their troubles were over when they discovered a coal mine with a caloric (or heating) value of 7,000 kilocalories per kilogram.

“We were wrong to think that,” the brothers said. They pointed out that it costs a total of 5 billion won ($4.2 million) to gather 60 thousand tons of coal and to load it into a ship. “We thought everyone would fight for this opportunity since it would generate a net profit of up to 600 million won per delivery.”

Unfortunately, people still prefer to invest in the stock or real-estate markets, the brothers said.

Despite being a latecomer to the new game, the government aims to increase the country’s ability to develop its own supplies of crude oil and gas to 25 percent by 2012.

Lee Sang-deuk, the GNP lawmaker, announced in June that he would focus his full attention on overseas resource diplomacy. His efforts have paid off. In October, South Korea and Bolivia signed a memorandum of understanding to form a partnership that would allow South Korea to explore and develop lithium.

Driven by the country’s newfound hunger for energy resources, 21 South Korean diplomats began moving out of advanced countries, including France and Germany, to areas such as Africa and the Middle East in spring 2008 to establish permanent bases in energy-rich countries from which they could strengthen existing diplomatic missions.

“Diplomats in those areas are now able to provide prompt updates on the current status of natural resources development in those countries,” said diplomat Cho Hyun.