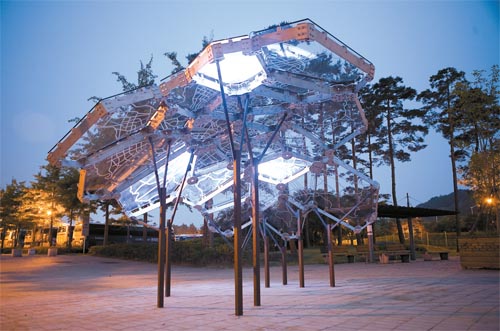 “Living Light-21”: The Living Light pavilion, a domed map of Seoul in the Peace Park at the World Cup Stadium, illuminates when a neighborhood’s air quality is better today than a year ago. Provided by Living Architecture Lab

As policy makers from around the world contemplate how to tackle climate change this month, two designers are doing their part to raise awareness about the environment in Seoul.

Soo-in Yang and David Benjamin, founders of the Living Architecture Lab in New York City, have built an interactive pavilion in the World Cup’s Peace Park that provides viewers with real-time information about air quality across the city.

The piece, called “Living Light,” is essentially a domed glass map of Seoul, complete with streets and rough outlines of the city’s districts. The 27 glass panels that make up the map correspond to the neighborhoods closest to the 27 existing air monitoring stations run by the Ministry of Environment. Through the borders of the panels Yang and Benjamin have strung LED lights that are connected to the government’s air quality database.

Each night, a panel lights up if that area’s air quality is better than the previous year’s reading, creating a concise visualization of the neighborhoods that have improved. Then, every 15 minutes the map goes dark and neighborhoods light up in order of the day’s best to worst air quality.

Yang, a graduate of Yonsei University, said he was inspired to create Living Light during a commute in Seoul several years ago.

“I was on a bus crossing Banpo Bridge and it was a beautiful day and I could see all the way to Hannam Bridge several kilometers away,” Yang recalled. “And the next day at about the same time of the day I was riding the exact same bus going to the exact same place and I noticed all of a sudden that I couldn’t see the Hannam Bridge because the air quality was so much worse.

“After that I started paying attention to the fluctuations in air quality of the city and I was really surprised and interested in the fact that the day-to-day fluctuations of air quality were really dramatic in Seoul.”

Living Light takes advantage of the government’s already extensive network and presentation of air quality information in Seoul. For instance, people can now check the air quality in their neighborhood on the AirKorea Web site (http://eng.airkorea.or.kr/).

But Benjamin says that what makes Living Light different is that they’re “bringing this Web site realm of information out into the public and displaying it on a public space and an occupiable pavilion.”

The public can also interact with the pavilion by text messaging the Living Light hot line (013-3366-3615) with their postal code.

The database responds with a text message indicating their neighborhood’s air quality compared with last year’s and the corresponding neighborhood on the pavilion’s map blinks, registering public interest in the environment.

“We’re connecting these big issues like air quality and environmental quality to individual information on the one hand because I can text in about my neighborhood,” Benjamin said. “But then also there’s this collective register of our interest in this important issue. This combination makes Living Light this democratic display of information in the public realm.”

Benjamin sees the public’s participation in Living Light as one critical step in combating climate change.

“This huge issue is going to require not only individual action like some days taking the subway or walking instead of driving or like changing our lightbulbs into energy-efficient lightbulbs. These issues of environmental quality and climate change are very complex issues and the solutions will require a public discussion and debate,” he explained.

Living Light was commissioned by the Seoul City Gallery Project, an art agent within the municipal government of Seoul.

Benjamin says that the City Gallery and the Ministry of Environment are potentially interested in the data they are gathering from the pavilion on the public interest in air quality.

Living Light is a permanent installation that will be open from Jan. 1. Go to World Cup Stadium Station, line No. 6, exit 1 and head over the bridge to the Pyeonghwa (Peace) Park. Living Light is on the north end of the park near the buses and solar panels.