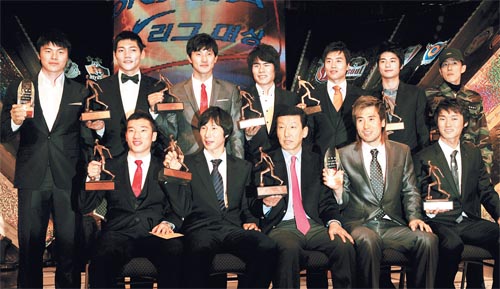 The winners of the “2009 Sonata K-League Award Ceremony” held at the Grand Hilton Hotel yesterday pose to show off their awards. The Most Valuable Player Award went to Lee Dong-gook (second row, third from right). [NEWSIS]

The renaissance year for the K-League star Lee Dong-gook just got better.

Lee, striker for the K-League champion Jeonbuk Motors, was yesterday named the most valuable player of the 2009 season. Lee led the K-League with 20 goals in 27 matches and helped the Motors win their first-ever league championship.

This was Lee’s first MVP award. In early 2007, the 30-year-old began what would become an unsuccessful stint with the Premier League club Middlesbrough and he returned to Korea in 2008.

Lee was dumped by Seongnam after scoring just twice in 13 matches, but with the Motors, Lee rediscovered the scoring touch that once made him a premier goal scorer for the national team.

“I don’t know if I deserve the MVP. This really has been a team effort,” Lee said. “Perhaps [team captain] Kim Sang-sik should have been the winner. I’d like to thank all of my coaches and fans who’ve helped me become the player I am today.”

Lee was also voted the Fan Favorite of the Year. Lee, who was the target of heavy public scorn as he toiled on the bench in England, quipped, “I thought I was famous for getting hammered [by the fans]. I am so honored to receive this award.”

The Motors were named the team of the year. They finished with the best record in the regular season at 17 wins, five losses and six draws and then defeated the upstart Seongnam in the championship series.

Jeonbuk coach Choi Kang-hee was the coach of the year. He thanked people behind the scenes who made sacrifices along the way. “My players survived my nagging all year long to get to the top, and I am proud of them,” he said.

Gangwon FC’s Kim Young-hoo won the rookie of the year, picking up 71 votes. After tearing up the defense in the second-tier National League in the previous three seasons, Kim led all first-year players in the K-League with 13 goals.

Both Kim and his head coach Choi Soon-ho were emotional when Kim took the trophy. Despite winning the collegiate MVP in 2005, Kim was not drafted by any K-League club and was forced to ply his trade in the National League.

He netted 56 goals in 59 games there before Choi, Kim’s National League coach, joined Gangwon and finally gave the footballer a chance to play on the big stage.

“I never gave up on my dreams of playing in the K-League,” Kim said, fighting back tears. “All the tough times I’ve gone through really make this award extra sweet.”

The K-League All-Star team of 11 players was also named. Pohang Steelers’ goalkeeper Shin Hwa-yong was the choice in net. Three of Shin’s teammates - Choi Hyo-jin, Kim Hyung-il and Hwang Jae-won - were selected to the defensive line alongside Jeonbuk’s Kim Sang-sik.