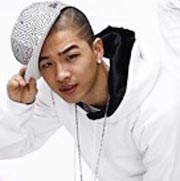 Tae Yang, who is a member of Korean pop group Big Bang, and Thelma Aoyama, a Japanese R&B singer, will release a new single in Japan titled “Fall in Love” on Jan. 27.

Thelma Aoyama, who debuted in 2007, has had many hits including “Sobaniirune,” which was popular in Japan.