Students hoping to transfer to Korea University listen to a lecture about the application process. [JoongAng Ilbo]


Lee In-young is a student attending a small private university in Seoul. She has taken a semester off to prepare for a transfer to another private institution, a move she has been planning since she received her College Scholastic Aptitude Test, or suneung, scores.

“I love the atmosphere, the professors and the curriculum of the school I am currently attending,” Lee said. 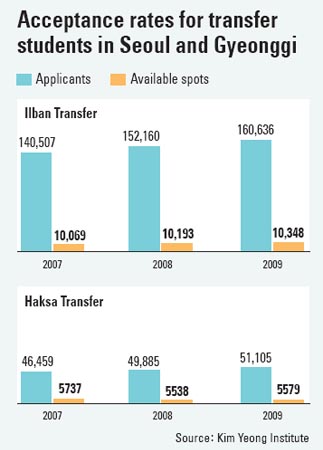 She is just one of the thousands of students nationwide competing for a limited number of slots available to transfer students. For these students, whose first priority is admission to a school ranked higher than the one they attend, the transfer is a strategic move they hope will put them in a better position in the job market once they graduate.

The competition for admission to universities with name recognition is intense in South Korea, but the stakes are even higher for transfer students, who often take a year off to prepare for the move, either by taking extra classes in their area of interest or beefing up their English language ability.

“The school’s name recognition cannot be underestimated,” said Lee. “I thought of retaking the suneung when I wasn’t satisfied with my scores but I thought it would be best to go to any college I could and then transfer.”

Lee’s father supports his daughter’s decision, saying, “After years of experience in the real world, I know that one’s alma mater matters a great deal.”

Yoon Mi-seon echoes these thoughts, and says she transferred to gain greater experience in her field, the second reason why students transfer. She graduated from a three-year junior college with a major in hotel service in Daegu and then transferred to a four-year university.

“I didn’t consider transferring until my second year of school, when it became clear I needed more experience in my field,” Yoon said. “While most junior college graduates had jobs that required physical labor, four-year degree recipients usually had desk jobs.”

Although the CSAT finished on Nov. 12, giving some students around the country a break, for transfer students the admissions game had just begun.

Korea University was the first to start accepting applications from transfer students on Dec. 19, and it will be followed by 190 other schools nationwide. The application process, which usually also includes the administration of an exam and an interview, will be complete in February 2010 when students are admitted.

The number of students submitting transfer applications in 2008 was between 70,000 to 100,000, while the number of transfer applications turned in was 260,000, indicating that each student typically submits more than one application, according to sources affiliated with universities and hagwon (private education institutes) that help students prepare for the transfer. The figures include both haksa transfers, which involve a transfer to another school after a degree has been awarded, and ilban transfers, which occur after completion of the second year of school at a four-year university or graduation from a two-year junior college.

In comparison, there were a total of 677,000 students taking the CSAT this year.

With youth unemployment rates plummeting, most transfer applicants are focused on getting into more prestigious schools to boost their qualifications or regional public schools that will give them more experience in their respective fields.

According to Park Byeong-young, a researcher at the Korean Educational Development Institute: “There are some cases in which students transfer from universities in Seoul to those in regional areas in search of a specialized department but that is very rare. The usual trend for transfer students is that they move to a school with a better reputation.”

Universities usually have an admissions quota for transfer students, and in most cases the number of applications outpaces the number of available slots, which means that the majority of students are unable to enter the school of their choice. The ratio of transfer applications to admissions in Korea University’s English department, where last year 237 students applied for just two spots, was 118 to one. For the business department, it was 82 to one.

These numbers are much higher than the ratio of admissions to CSAT scores, which was 3.99 to one for the same year.

Preparing for the switch

Students spend a lot of time and energy preparing to transfer. It is also expensive.

Prep courses at private education institutions cost around 300,000 won ($250) a month for four to five classes a week lasting three to four hours each. Students also usually take a semester off to study English to boost their application. Seventy percent of the schools in Seoul and the Gyeonggi area require applicants to take an English proficiency test, which takes up a large proportion of the assessment.

“It is a huge decision to take two semesters off to change schools for employment,” said Kim Seung-beum, who had prepared to transfer to a university located in Seoul. “Even though I didn’t get in, I still feel that a year was well spent in improving my English.”

For those who do win admission, the challenge doesn’t stop when they transfer. Many students find it difficult to acclimate to the new school and its policies, and say they don’t get much help from faculty.

“Although changing schools gave me more choices after graduation, I didn’t have any information on what those choices were, nor did I have anyone to turn to for help,” said Yoon.

According to Park, “Many transfer students have greater satisfaction with their majors and are more devoted to their schoolwork than students who have gained admission with conventional measures. However, the differences in curriculum from their original school and the lack of information on professors and classes has a considerable effect on the academic performance of these students.”

However, there are questions about whether the transfer gives students a leg up or bogs them down in extra classes that may not, in the end, boost their chances in the job market.

Lee Jong-hyuk, who transferred to the University of Seoul from a private university in Gwangju and will be graduating in February, faced a number of obstacles after he decided to change schools.

“I think that unless the applicant who has transferred has other great credentials, he or she may suffer some prejudice,” said Lee. “Every interviewer I met with asked me about my transfer and their attitude toward it seemed negative.”

Despite these unfavorable conditions, the number of students who yearn to change schools is increasing. In 2006, the number of transfer applications was 191,966, but in 2008 that number increased to 211,741.

“Transferring in Korea merely used to have a higher-ranking school on a student’s resume, which comes with a high price,” said Park. “The system needs to change to serve a more practical need.”

The researcher laid out his own prescription for change, saying, “Rather than focusing on English or math entrance exam scores, it might be more beneficial to find a way to accept students in different fields. Also, each university should consider creating programs for transfer students and help them adapt to their new environment.”