A beacon in the night

A beacon in the night 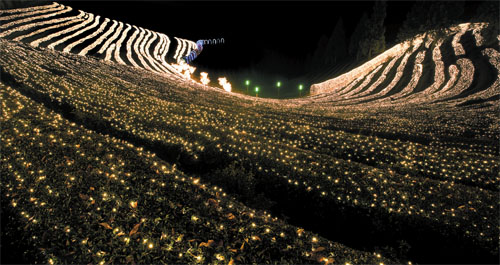 Lights illuminate the furrows of the Boseong green tea fields in South Jeolla.

Like the stars themselves, strings of colorful lights set against the dark winter sky can spark the imagination and transport us to a world of fantasy.

At this time of year, there are numerous light festivals and special displays illuminating the city, from Gwanghwamun Plaza, to the Cheonggye Stream, to the streets of Euljiro and Myeongdong in central Seoul, which are home to large shopping districts.

The city is not the only place that is glowing. Outside of Seoul, there are plenty of lights to be seen as well, in the green tea fields of South Jeolla and the forest of Gyeonggi. Set in the middle of nature, these displays of light are quite different from those in Seoul.

While the festivals in Seoul are dynamic, those in nature are solemn as there are no other lights around to interfere with the dark. 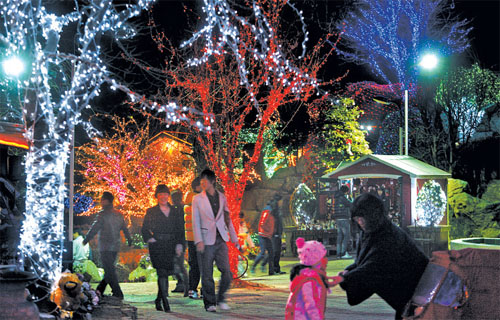 The trees and buildings on Herb Island, Gyeonggi, are decorated with fanciful lights in the colors of the rainbow. By Kwon Hyuk-jae

Whether you’re in the city or the country, all of these winter light displays change our perspective on the world, if only for a moment.

Here are a few suggestions for the exhibitions and accompanying events you can enjoy with family and friends, no matter where in Korea you are. All you have to do is follow the lights.

The southern end of the square is lit up by “Fractal Turtleship,” an installation by the late Korean video artist Paik Nam-june. The piece consists of a ship shaped like a huge turtle that is made of TV monitors. It was originally located in the Daejeon Museum of Art and has been relocated to Seoul for the festival. The turtle ship, which measures 16 by 10 by 4 meters, is located right behind the statue of Joseon Dynasty Admiral Yi Sun-sin, who defeated the Japanese Navy during the war.

At night, the facades of the Sejong Center for the Performing Arts and the KT headquarters are transformed into gigantic screens on which digital images of colorful fish swim and the cultural assets in Seoul are literally shown in a whole new light.

The screens show over 30 multimedia works. One of these shows images from different neighborhoods around the city.

The exhibit also has an interactive component. Visitors to the square are projected onto the screens three times a day throughout the duration of the festival at 7:30, 8:30 and 9:30 p.m.

On the northern side of the plaza, there are light installations with images of chrysanthemums and other brightly colored flowers, as well as the image of a gate and other fanciful items.

In between the statue of Yi Sun-sin and that of King Sejong, there are media towers that show more traditional images of Korea, including scenes from traditional music and dance performances.

The light festival continues through Jan. 24, 2010. The light shows start at 7 p.m. and continue through 10 p.m. daily. For more information, visit http://winter.hiseoulfest.org.

The area also displays an installation called “Music Notes of Light.” In the installation, Blue music notes on a white background appear and dance in the night sky, with large umbrellas and other objects appearing in between to liven up the scene.

Turning from the Cheonggye Stream to the Euljiro streets, near the Jangtong Bridge, visitors will arrive at “Eulji Hanbit (Light) Street,” which houses a light park and gallery.

The pieces that are part of the Hanbit Media Gallery are interactive. When a visitor approaches the “digital folding screen,” the images on the screen shift in time with the visitor’s body movements.

This nocturnal stroll ends in front of the Bank of Korea building, which is located right across from Shinsegae Department Store in central Seoul.

There, the large fountain in front of the central bank is adorned with thousands of sparkling lights that are sure to brighten your night and warm your heart.

The green tea fields of Boseong, which are normally dark at night, light up like they are ablaze during this festival in Boseong County, South Jeolla.

For the festival, 1.5 million lightbulbs have been installed on the fields, and the lights on the furrows continue through the ridgeline. Not far from the furrows, the organizers from Boseong County have installed what they say is the largest image of a Christmas tree in the world. The tree is 120 meters high and 160 meters wide and made of lights installed all over the field.

Garden of the Morning Calm

The colorful lights in this garden make you feel like you are in Teletubbyland. The area features five different gardens, and the Moonlight Garden has a little church, to which there is a path with star-shaped lights and angels.

The displays of golden coaches and tunnels of light were meticulously handcrafted by 35 of the garden’s employees.

The festival continues through February. The lights can be seen between 5 and 8:30 p.m. For details, call the garden at 1544-6703 or www.morningcalm.co.kr.

The small villages of Herb Island are made to resemble French and Venetian towns. During the winter, the entire area is covered in lights, making it look like something out of a childhood fairy tale.

The area also has an indoor botanical garden with 180 different species of herbal plants from the Mediterranean.

As if that weren’t enough, the festival season is complemented by a series of live concerts and performances on the weekends.

The lights draped around the buildings at Everland Theme Park’s Light Street look like a soft covering of snow. Above, a canopy of bluish lights hangs in the sky. Over 2 million lights were used to create this installation. Light Street begins at the main gate of the theme park.