Killers focus on music for the masses

Killers focus on music for the masses 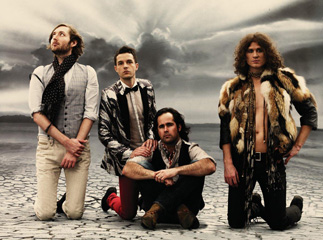 
“A band for people” - that’s how Brandon Flowers describes the Killers, the group he’s made music with since 2002. And it’s the easy acceptance of that label, Flowers says, that has helped the band stay on top while so many of its contemporaries disappeared.

“The bands coming out when we were coming out, they’ve kind of gone away,” Flowers, who is lead vocalist and keyboardist for the Killers, told the JoongAng Daily through a publicity firm. “They were afraid of normal people liking their music, or it was all about style. We had the sense of style since the beginning, but our music is for everyone. You can’t hinder your music from affecting someone.”

But the Killers have done more than simply survive. Their 2003 debut, “Hot Fuss,” was a bombshell of occasionally introspective pop, while the 2006 follow-up “Sam’s Town” was a more sophisticated love letter to the band’s home city of Las Vegas.

“We approached [Hot Fuss and Sam’s Town] the same, but we were just different people. When we made the first album we were really young,” Flowers said. “When we made the second album it was different. Many new experiences, new influences ... And I think with the third album we have changed quite a bit, as well.”

That collection of songs, “Day & Age,” came at the end of last year, led by it’s first single “Human,” four minutes of existential musings set to a synth hook.

The tour for that album is what brings the band to Seoul, to perform at Olympic Hall on Feb. 6.

The band may try to shake things up with each new release, but it also has traditions it tries to maintain: Every Christmas season brings a new holiday single, with the proceeds going to Product RED, an initiative headed by Bono designed to raise money to fight AIDS, tuberculosis and malaria around the world. In 2006, the band released its first Product RED single, “A Great Big Sled,” followed by “Don’t Shoot Me Santa” in 2007 and, last year, “Joseph, Better You Than Me.”

This year, the Killers have put together a Latin-tinged track titled “¡Happy Birthday Guadalupe!” featuring Wild Light and The Bronx.

“Four thousand people die every day from AIDS in Africa. Two-thirds of the people who have AIDS are in Africa,” Flowers said. “Bono called it an emergency, and really it’s true.

“[The single] comes out every year on Dec. 1 to mark World AIDS Day. So always at the end of an interview I want to mention this. You can download it on iTunes or get a physical copy on the Internet.”

Of course, the one big question is: How will the Killers change next? What will their next album be like?

“I’ve just got a feeling that it’s gonna be the heaviest album,” Flowers said. “Thing’s gonna be heavy.”