Building the team that resurrected an ancient life

Building the team that resurrected an ancient life 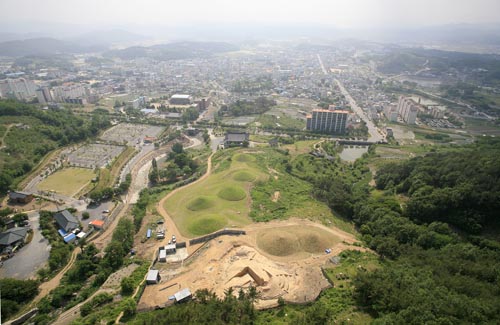 The girl’s remains were discovered miraculously intact inside a tomb that had already been visited by grave robbers, in Changnyeong County, South Gyeongsang.

The philosopher Voltaire once said, “His face bespoke his soul.” Due to an old European superstition, people believed physiognomy would allow them to read people’s fortunes through the bumps on their heads. And Eastern medicine practitioners think they can detect disease by examining the face.

The physical reconstruction of the 1,500-year-old remains of Gaya Girl first involved the physical excavation of her skeleton (1), followed by the reassembly of the bone fragments (2), and the replication and extrapolation of the bone structure (3). Then artists and scientists added layers of clay and other materials (4), to produce a final image of the ancient teenager (5). Provided by The Gaya National Research Institute of Cultural Heritage

We humans have a natural fascination with faces. So it’s no surprise that we’d wonder about the appearance of those who came before us. Last month, Korean scholars put a face - and body - on a 1,500-year-old set of human remains. The story made headlines across Korea.

Physical reconstruction based on ancient bones or mummies is not a new technology, but it was the first time it had been used in Korea.

Archaeologists say Korean soil is so rich that they rarely find a complete set of bones in a well-preserved state. Although Koreans didn’t artificially mummify their ancestors like Egyptians did, there have been more than 100 naturally preserved mummies discovered here. Still, none have been the subject of reconstruction.

This recent case was also the first in Korean scientific history to bring together so many experts in disparate fields - archaeology, forensic medicine, anatomy, genetics, chemistry and others - setting an ideal precedent for similar projects in the future.

The scientists who found her gave her the designation “22-01.”

After reassembling and replicating her bone structure, and adding some clay, silicon, hair and paint, they gave her a more human nickname, “Gaya Girl,” for the area from which she presumably came, the Gaya Confederacy (42-562). That was the name splashed across the news media.

The project transformed a skeleton in a pile into a real person.

“This whole project began with an interest in people,” Lee Seong-jun, the scientist at the Gaya National Research Institute of Cultural Heritage in Changwon, South Gyeongsang, who led the two-year project, recalled in a recent interview.

“We believed in approaching human bones not just as archaeological data, but as things that have traces of a human whose life and death could be relived through knowledge of both science and the liberal arts.”

Lee’s institute, located in the Gaya heartland, is devoted to that loose affiliation of ancient polities. Its archaeologists were carrying out regular restoration work on a group of tombs in Changnyeong County, South Gyeongsang when they made their remarkable discovery after a cold, initially disappointing day in December 2007.

“My first impression? I’d have to say pretty disturbing and regrettable,” said Lee Seong-jun, who was one of the first at the site. “There had been a grave robbery, so the tomb was awfully disturbed and not much was left.”

According to Lee, 99 percent of the larger mound-shaped graves in the Gyeongsang provinces have been robbed, including the tomb in which Gaya Girl was found, Tomb No. 15.

Nonetheless, archaeologists recovered dozens of relics, mostly pottery but also gold and jade jewelry as well as pieces of horse tack, leading them to believe the tomb belonged to a king, a noble or another powerful aristocrat in the region.

As Lee and his team delved deeper into the tomb from the opening the robbers had dug, they sifted through bone fragments scattered inside it, and there she was: an almost complete, untouched set of bones of a girl they would later estimate was around 16 years old, astounding the scientists on the scene.

That was when a bold idea stroke Lee.

“She’s survived 1,500 years. She’s even survived the robbery,” Lee said, referring to her with a respectful Korean word loosely translated as “lady.”

“I thought giving her a face and body would send a strong message to people.”

Lee had to work hard to convince people to back such a unique project requiring so many divergent special talents. It took him five months to convince the authorities at the state-run Cultural Heritage Administration to support him, to form an advisory committee and to win over the experts he needed.

Hard work, and a little imagination

One of those experts was Han Seung-ho, an anatomy professor at the Catholic University of Korea. In 2002, Han and his team at the university’s Catholic Medical Center reconstructed the face of Father Dae-gun (Andrea) Kim, who was the first priest and martyr in Korea, entrusted to them by Myeongdong Cathedral in central Seoul. They were also involved in the study of changes in Koreans’ average physical measurements in 2004 conducted by the Korean Agency for Technology and Standards.

But even for these veterans, the work involved several challenges.

“The bones were in good shape considering they’re 1,500 years old, but as we tried to work on them many of them crumbled,” said Lee Uo-young, one of the members in Han’s team at Catholic University. The skull, for instance, broke to pieces in the lab. “For such bones, we had to employ several methods including 3-D reconstruction using the computer.”

A total of 157 bone samples were recovered from the tomb. Han’s team made replicas of 108 of them.

It was also difficult to nail down Gaya Girl’s outward appearance in some places, since bones don’t always tell the whole story.

“Also, the soft tissue is a determining factor in facial reconstruction, but we don’t have data on average soft tissue measurements during the Gaya period.”

To fill in these gaps, Han’s team had no choice but to use information on the soft tissue measurements of an average 16-year-old Korean girl of the present day.

That missing piece reflects how little Koreans know about the early history of the peninsula. With few actual records still extant about the era before the Goryeo Dynasty (918-1392), historians must rely on dubious sources like “The History of the Three Kingdoms,” which purports to chronicle the Three Kingdoms Period (57 B.C. - A.D. 676) but was in fact mostly written in 1145, long after the period ended.

And even that tome covers state affairs almost exclusively, and Lee from the Gaya Institute laments, “We just don’t know how the average people lived in that era - what they wore, what they ate and the like.”

That’s why the physical reconstruction involved not just science but also a little imagination, experts say. Seasoned sculptor and artistic anatomy expert Kim Byeong-ha and the special makeup team that worked on the award-winning films “Thirst” and “Mother” took part in the reconstruction.

Of course, the big question is, “Is this what Gaya Girl really looked like?”

To this question, the experts can’t give an unqualified yes, but Lee still believes the work had value.

“We know that this reconstruction may not have been perfect. But we hoped to change the mind-set of Korean experts, that recovery of human remains and relics should be done so that we can reconstruct their lives and the era in which they lived,” Lee says.

So where is Gaya Girl now?

After being displayed at the National Palace Museum of Korea in Seoul and the Changnyeong Museum in Changnyeong, she’s now resting at the Gaya Institute for her next big “show,” which, according to Lee, has yet to be finalized.