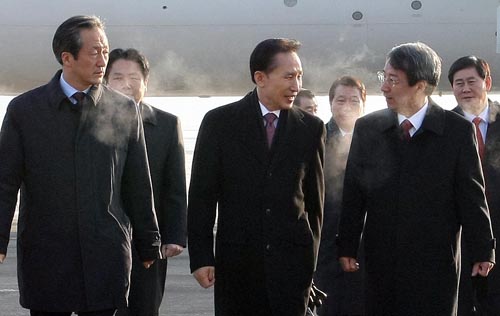 President Lee Myung-bak, center, arrives at the Seoul Airport yesterday morning after winning the United Arab Emirates’ $40 billion nuclear power plants contract. Korea is planning to bid for a Turkish nuclear power plant construction project, Foreign Ministry sources said. The Turkish government is reportedly pushing to build four nuclear plants, each costing some $5 billion, along the coast of the Black Sea and the bids are expected to be called in the first half of next year. [YONHAP]