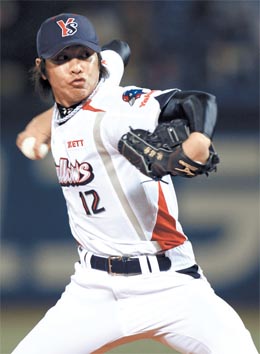 Lim Chang-yong will return as the Yakult Swallows’ closer next season - with much more cash in his pocket.

According to reports by Sports Nippon, a Japanese sports daily, the Swallows and Lim agreed to a one-year deal worth $1.6 million. Lim had received $500,000 in 2009 and $300,000 in 2008, his rookie season in the Nippon Professional Baseball league.

The significant raise was expected considering Lim’s performance in 2009. The 33-year-old posted five wins, four losses and 28 saves with an ERA of 2.05. Lim dominated NPB batters in the early stages of the 2009 season by not allowing a run in 20 appearances and became the first Korean-born player to be voted by fans to the NPB All-Star game.

Lim’s success on the mound also translated to a solid year for the Swallows as they reached the postseason for the first time in five years. In 2007, Lim signed a two-year deal with a club option for an additional year. This offseason, there had been rumors that the Swallows were looking to sign Lim to a multi-year deal, but the two sides eventually agreed on a one-year deal.

Aside from his salary, Lim has earned more than $1 million in each of his two seasons in the NPB from performance incentives. If Lim continues to perform at the level he has in the past two years, the closer can earn around $2.6 million next season. That would make him the highest-paid pitcher on the Swallows roster.

However, many peg Lim’s value at $3 million to $5 million per season. The figure is based on the salary of the top closers of the Central League. The Chunichi Tigers’ Hitoki Iwase, 35, earns $4.5 million, and the Yomiuri Giants’ Marc Kroon, 36, earned $3.5 million last season. Hitoki posted two wins, three losses and 41 saves on a 2.12 ERA while Kroon posted one win, three losses and 27 saves on a 1.26 ERA in 2009.

Lim made his KBO debut with the Haitai Tigers in 1995 and moved on to pitch for the Samsung Lions from 1999 to 2007. Lim has also been a regular on the national baseball team in the past decade, playing on the 2000 and 2008 Summer Olympics squads as well as in the World Baseball Classic.