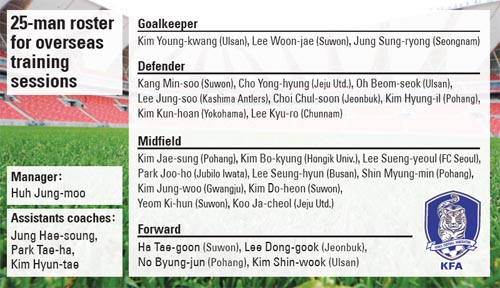 Promising young players will get plenty of chances to earn a spot on Korea’s 2010 World Cup roster, as national team manager Huh Jung-moo made clear yesterday when he announced his 25 selections for upcoming training camps in Rustenburg, South Africa, and Malaga, Spain, next month.

The list includes 10 players without any experience on the national team, with most in their early 20s.

“The young players competed well against some of the players with experience on the national team. I also took into consideration prospects for growth. I wanted to take these players on the overseas training camp and test them further,” Huh said.

The most notable selections were Kim Shin-wook, 21, a forward for Ulsan Hyundai, and Kim Bo-kyung, a 20-year-old midfielder for Hongik University. The older Kim, listed at 196 centimeters (6 feet 4 inches) scored two goals during practice games at recent tryouts. Kim converted from defense to forward this season with injuries to Yeom Ki-hoon, Lee Jin-ho and other Ulsan players. The rookie delivered, with seven goals and one assist in 27 matches. At the moment, the national team lacks a forward with a finishing touch, aside from Park Chu-young, who has performed well for AS Monaco in Ligue 1. It remains to be seen if Kim can fill that role.

“Kim Shin-wook played really well during the two-day tryout. He has a good set of physical tools and also has solid balance for a forward his height. He also has great dribbling skills,” said Huh.

The younger Kim is a sharp midfielder. He assisted on both of Kim Shin-wook’s goals at the recent national team tryout. He also scored two goals for at the U-20 World Cup in Egypt earlier this year.

“Bo-kyung, an Olympic team member, is a player with a bright future. He is intelligent and, though still young, he enjoys making bold moves. He possesses an accurate left-footed pass and knows how to improvise on the fly,” Huh explained.

The manager already announced a preliminary 35-man roster earlier this month and held tryouts at the National Training Center on Dec. 26 and 27. He put the players through grueling physical tests and practice games to help choose who would go to the overseas camp, all in the service of grabbing the best Korean footballers for the World Cup in South Africa next June.

Choi Hyo-jin of the Pohang Steelers, Kim Chi-woo of FC Seoul and five other players did not make the cut, while former captain Kim Nam-il, who recently signed with Russia’s FC Tom Tomsk, and Kwak Tae-hee, who signed with Kyoto Purple Sanga, could not participate in the tryouts. Lee Keun-ho of Jubilo Iwata also failed to receive permission from his team to join in.

But the 10 players who failed to make the overseas training camp roster have not been cut for good, as they still have a shot at being selected for the East Asian Football Championship, to be held in Japan from Feb. 6 to 14.

While Huh tested overseas-based players in friendly matches last month, the upcoming training camps, which include six friendly matches, will allow Huh to hone his final list of 23.

The national team will play three friendly matches in Rustenburg between Jan. 5 and 15, against Zambia and two South African professional clubs. Huh and his men then head to Malaga and play Finland and Latvia. The national team returns from their overseas training camp on Jan. 25.