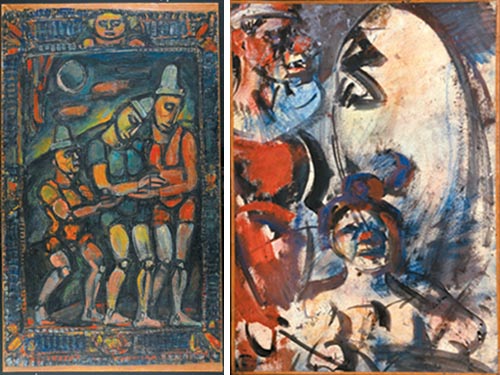 French painter Georges Rouault (1871-1958) is famous for his religious paintings, and the biblical themes in his works are expressed with the use of powerful brush strokes and primary colors. Rouault’s “L’apprenti-ouvrier,” for example, depicts a person who looks as though he is suffering for his religion and is made more poignant with the use of these elements. Rouault also portrayed the less privileged in society and these paintings also appear to have a religious bent. The figures in other works wear solemn expressions and pose like those in Renaissance religious paintings, although unlike other works from the Renaissance period, Rouault’s works seem to contain more modern elements. Taken together, Rouault’s paintings represent a combination of religious themes, modernism and humanity.

The exhibit titled “Georges Rouault: Le sacre et le profane” at the Hangaram Art Museum at Seoul Arts Center gives a rare opportunity to see both the sacred and the human sides of Rouault’s work. All 168 paintings on display are from the Centre Georges Pompidou in Paris. This is the first time in 40 years that Rouault’s works have been shown to the public. 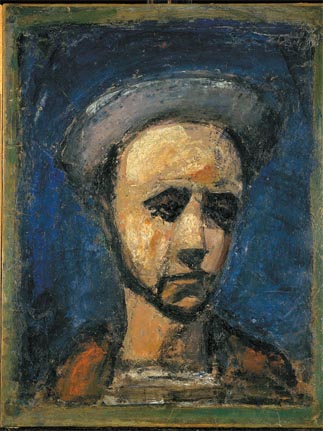 Rouault is also known for having painted ordinary people, especially the poor. The painting titled “Le clown blesse,” which is part of his “Circus” series, portrays two clowns supporting another clown who is injured.

Rouault also painted prostitutes, though they were described as “girls” in the titles.

“These paintings show Rouault’s identity as a sympathetic person,” said Lim Eun-shin, curator of the exhibition.

He finished the print series “Miserere” in 1927, following the death of his father. It consists of 58 black-and-white works.

Rouault’s paintings are considered fragile because many of them were done on paper attached to canvas. The mix of watercolors, pastels and oils creates a unique feel.

The exhibit is divided into four different sections. It starts with the Circus series, and is followed by some of the artist’s unfinished works, his later works and the Miserere series.

Rouault was a perfectionist and he is said to have been discontent with many of his works.

Visitors will have to judge for themselves when they see the exhibition, but given the beauty of these paintings, they may find it difficult to agree with him.