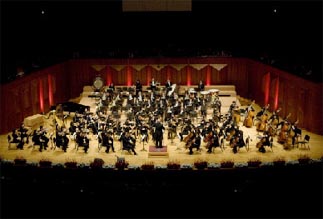 To end the year 2009, the Seoul Arts Center will be holding its annual New Year’s Eve Concert on Thursday at the Seoul Arts Center. The concert features some of the best musicians in the country. See MUSIC below. Provided by the Tourism Promotion Division of the Seoul Metropolitan Government

To Thursday: “Snipersound Vol. 3.” The group Snipersound will hold an all-out, no-frills concert to celebrate the New Year. Featuring M.C. Sniper, Outsider, L.E.O, Mr. Roo9, M.C. BK, KEIKEI, and more, this concert will provide a venue for great music that unites people and ideas for the new year.

To Thursday: “Thank You 4 the Music.” Four of Korea’s top talents will come together for this concert: producer/pianist Kim Hyung-suk, pianist Rho Young-sim, singer Joe Won-sun, and crossover vocalist Kai.

The group will present several upbeat fusion pieces ranging from pop to classical music. This will be a rare opportunity for fans to see these artists perform as they all typically work behind the scenes of the mainstream media.

Unlike other holiday performances that stay within the realm of carols and gospels, this program promises to deliver sounds that transcend genre and form.

Today: “Miracle on 59th Street.” Prominent K-pop group SG Wanna Be will celebrate the year’s end with a live concert. The five-member group is at the forefront of hallyu (the Korean wave) and has developed a huge following in both Korea and Japan.

The concert features a few new tricks, including a collaboration with a string symphony orchestra as well as new versions of their hit songs.

This event is sure to please the group’s long-time fans and casual listeners alike.

Today and Tomorrow: “White Hole Concert & Party.” The creators of this event didn’t intend for it to be the biggest party of the year, just the best one.

With affordable prices, newly built facilities, and the beautiful and natural surroundings of the Seoul Dream Forest, this New Year’s event is sure to provide audiences with lasting memories.

Comprised of classical music and performances of traditional Korean music and dance, the concert will be divided into two parts. The first part will consist of a symphony from the Seoul Metropolitan Youth Orchestra and an aria duet by baritone Ko Seong-hyun and soprano Kang Hye-jung.

The second half of the evening will feature excerpts from the musical “Mozart” and a countdown to the new year accompanied by gugak (traditional Korean music) artist Jang Sa-ik.

During the intermission, audiences will be invited to write wishing cards to themselves, which they will receive next year in December 2010.

Seoulites have enjoyed the Sejong Center’s year-end concert for years. This year’s run will provide audiences with enough enjoyment to last throughout the coming year.

Gathering at the Seoul Arts Center to celebrate the New Year has become somewhat of a tradition for Seoulites. As an event recognized throughout the nation for the high quality of the music presented, appearances by some of the best musicians in Korea are common. This year’s concert will feature acclaimed violinist Zakhar Bron, harpist Yun Ji-yun, baritone Seo Jung-hak and singer Kim So-hyun, alongside the Korean Chamber Orchestra conducted by maestro Kim Min. Popular television personality Jin Yang-hye will host the program, which includes compositions by Johann Strauss, a lied piece from Schubert, and famous songs by Andrew Lloyd Webber including “Think of Me” and “All I Ask of You” from the musical “The Phantom of the Opera.”

In addition to its musical presentations, the New Year’s Eve concert will also feature a countdown to 2010, fireworks and a balloon release.

D.J. FPM (Fantastic Plastic Machine) is an electronic musician/D.J. who played a pivotal role in the Shibuya-kei movement -the fusion of bossa nova, lounge music, house music and other types of music.

Daishi Dance, hailing from Sapporo, is famous for his hybrid mixes that blend emotive vocals and hypnotic melodies.

To Thursday: “2009 Opera Gala Concert.” The Korea National Opera will perform highlights from the company’s four main productions of 2009.

The company’s productions of “The Magic Flute,” “Norma,” “Madama Butterfly” and “Elixir of Love” all enjoyed great success during their respective runs. However, the short length of the performance runs left many fans without an opportunity to see the shows. This year’s gala provides audiences with another chance to see the top tier performances, which the Korea National Opera has become so well known for.

To Thursday: “Princess Bari.” The art of pansori is a traditional Korean treasure. It is a method of musical storytelling in which one singer and one drummer perform, depicting a wide range of emotions. Theater Company Jeongmiso’s 100-minute production of “Princess Bari” will feature vocalist Jo Jeong-hee singing under the direction of Kim Su-hyung.

In the story, an ancient king abandones his daughter at birth. Bari, as she was called, was then taken in and raised by an elderly couple.

One day, the king and the people of his kingdom become ill from a disease that can only be cured with an elixir from heaven.

Bari, who had grown up harboring spite toward the king, was asked to find a cure and bring it back to the kingdom. She agreed, not for the sake of the king, but rather to end the immense suffering she witnessed amongst her people.

The production tells the story of Bari’s seven-year quest for a cure and her eventual ascent to the throne.

This is a classical piece of Korean folklore not to be missed by anyone.

The performance starts at 8 p.m. on Wednesday and 5 p.m. on Thursday.

Thursday: “Traditional Performing Arts.” In 1988, four of the proteges of Kim Duk-soo, the godfather of samulnori, a form of percussion music, formed a Korean performing arts group called Samulgwangdae.

Since then, Samulgwangdae has been bringing authentic renditions of Korean traditional arts to audiences around the world.

Despite the troupe’s traditional repertoire, their sound is anything but. The group always incorporates new elements from a variety of different forms, and critics have said that the extent to which Samulgwangdae’s sound has evolved while simultaneously maintaining their cultural authenticity is astounding.

This 90-minute show will feature both traditional and contemporary performing arts including samulnori, sinawi, pansori and B-boy dancing.

The one-time only performance will be held on New Year’s Eve at the Dream Forest Art Center.

Thursday: Homigot Beach is the very first place where the sun rises in Korea.

In honor of the new year, festival organizers have planned a variety of performances as well as a fireworks display.

Visitors can also welcome in the New Year with a bowl of delicious tteokguk (rice-cake soup), which will be made in a large iron pot.

From Seoul, take a bus to Pohang from Express Bus Terminal Station, line No. 3, exit 1.