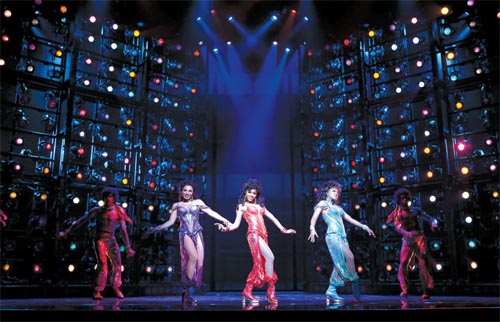 Despite its high ticket sales and positive feedback from local audiences, the musical “Dreamgirls” was one of two major musical productions that failed to turn a profit this year. Provided by OD Musical Company

The musical theater industry was full of ups and downs this year.

Each year since 2001, the local musical theater industry has reported 15 percent annual growth. This year, it was estimated to have been worth around 200 billion won ($182 million), but is now said to be reaching its saturation point. Making matters worse, the global economic recession and the new flu made people reluctant to open their wallets and line up for musicals.

Still, you can’t keep a good musical down, and there were some productions that just couldn’t be suppressed. Others, however, were not so fortunate and bordered on flops. We surveyed the musical theater landscape to bring you a portrait of the winners and losers in musical theater this year.

“Dreamgirls” and “Spring Awakening” were the most-talked about musicals of the year. Dreamgirls was the first co-production by companies from South Korea and the United States. Local audiences were fascinated by the blockbuster stage settings and props. Particularly impressive, audiences say, were the five giant light-emitting diode panels installed onstage that created the illusion of a larger space. After a five-month-long run here, the show went to the Apollo Theatre in New York last month. The Korean production of Spring Awakening, which swept the 2007 Tony Awards in its Broadway version, received rave reviews from local audiences and critics for its handling of weighty issues confronting today’s teens such as suicide and sex.

Other musicals fared better, despite the odds. These include Korean productions of: “The Three Musketeers,” which earned a net total of 800 million won; “42nd Street,” with 500 million won; and “Jekyll and Hyde,” with 500 million won. Ticket sales for “The Phantom of the Opera” were also good. As of this month, the show had sold 12 billion won in tickets. Other musicals such as “Hedwig and the Angry Inch” and “Looking for Kim Jong-wook,” which were staged in small and midsized, theaters were also hits this year.

Despite the slump in the local musical theater industry, 10 percent more musicals were produced this year than in the previous year, according to Interpark, an online ticket reservation site.

“Even if a musical fails to attract an audience, the production company never goes bankrupt because the company does not pay the actors and production staff, leaving the company free to move on to another musical,” said Lee Seong-hoon, of the performance department at CJ Entertainment. “In addition, Korean musical theater companies do not sign contracts with the staff or the actors.”

Meanwhile, a chronic problem within the local musical theater industry is its heavy reliance on celebrities.