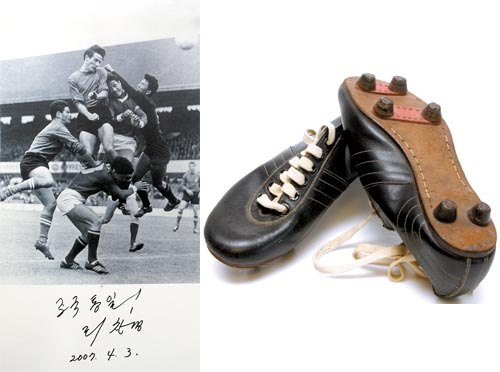 Left: This photo was taken at the 1966 World Cup match between North Korea and Italy. On the far right is North Korean goalkeeper Lee Chang-myung, who signed the photo in 2007. Right: The cleats worn by North Korean football players in 1966. By Choi Jung-dong

Sports memorabilia can fetch a high price, but most collectors aren’t in it for the money. They’re in it for the stories - and pieces of history decades old tend to collect a lot of stories.

The British documentary director Daniel Gordon, who directed “The Game of Their Lives” (2002), became enamored with the 1966 North Korean national football team after he saw a videotape of the communist underdogs playing against Portugal in the quarterfinals of the 1966 World Cup in England. Over and over, he contacted North Korean officials for their help in filming a documentary on North Korean football. He was finally allowed to enter North Korea with his equipment in 2001.

In creating the documentary, Gordon met with seven surviving members of the 1966 squad. In an effort to provide his viewers with a piece of history, Gordon searched for memorabilia from the fateful World Cup during his meetings. But their jerseys, socks, cleats or track suits - commonly kept by players elsewhere in the world - were nowhere to be found. 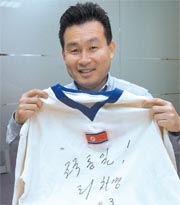 “The English football fans who rooted for us during the 1966 World Cup came and took everything we had; our uniforms, socks and football cleats, we gave everything away,” said Lee Chang-myung, the goalkeeper on the team.

The players that did not give away their uniform wore them around the house and then tossed them into the trash when they wore out without much thought. Why did they do so? At the time, they had no idea how much the uniforms could be worth in the years to come.

One of the few that remained interested in preserving North Korean football memorabilia was Lee Jae-hyung. The 47-year-old South Korean played football in his youth, but failed to live up to his dream of playing professional football due to injuries. He never lost his love for the game, though, and instead started collecting souvenirs. Today Lee is the manager of the planning division for Best Eleven, a football magazine. And in that position, he experienced a rare moment on April 3, 2007.

On that day, the U-17 North Korean national team was staying at the Castle Hotel in Suwon, Gyeonggi. Lee Chang-myung, the goalkeeper on the 1966 squad, had accompanied the team as its director. That’s when Lee Jae-hyung had a chance to meet Lee Chang-myung. He took with him a North Korean jersey worn by one of the players at the 1966 tournament, purchased in February 2006 at the Portobello Market in London, England.

Lee paid 2,000 pounds ($3,200) for the jersey at the time, but it did not come with a certificate of authenticity and hence the collector had no way of knowing for sure if it was authentic. But in meeting the U-17 leader, he got the confirmation he sought.

The collector’s persistence had paid off, and Lee said that, upon seeing the old jersey, the former North Korean goalkeeper was struck dumb in surprise at finding such a rare item in South Korea. 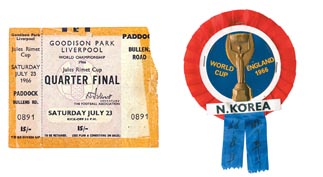 Left: A ticket stub from the 1966 World Cup quarterfinals match between North Korea and Portugal. Right: Pak Doo-ik wore this commemorative patch at a dinner held to celebrate North Korea’s 1-0 win over Italy.


Lee said the retired player exhorted him to take care of the jersey, and verified that the number “10” sewn onto the back indicated it once belonged to his former teammate Kang Ryong-woon. When the collector asked for an autograph, the elder Lee signed his name and wrote the date and “Korean reunification!” on the front of the jersey.

While fans of rare sports paraphernalia like Lee and Gordon have taken a keen interest in North Korean football for years, a large number of casual fans have begun to join them recently after the North Korean squad qualified for the 2010 World Cup, for the first time since the 1966 tourney.

In 1966, North Korea left a lasting impression at the world’s most popular sporting event, defeating Italy, one of the top teams, in the round of 16 to reach the quarterfinals. The unlikely crew seemed well on its way to the next round when it scored three goals against Portugal at Goodison Park in Liverpool. However, Portugal came back on four goals by Eusebio and went on to win the match, 5-3. Still, it was the first time an Asian team had reached the quarterfinals, and fans lauded the team’s determination and focus.

At the 2010 World Cup, North Korea has been grouped with Portugal, Brazil and Cote d’Ivoire in Group G, which many are referring to as the “group of death.” As the world at large watches curiously to see how the team will fare at its first World Cup in over four decades, interest in the team’s history is also undergoing a revival.

That’s where Lee comes in. Lee’s collection contains about 50 rare pieces of North Korean football memorabilia. He plans on hosting an exhibition about football on the Korean Peninsula in South Africa starting on March 2, a full 100 days before the start of the World Cup.

“I knew a time would come when South and North Korea would compete at the same World Cup. I began to collect North Korean football memorabilia for this very reason. But I didn’t think it’d happen so quickly,” he said.

Lee’s obsession with football is clear right away to any visitor to his three-bedroom apartment in Bomun-dong, Seongbuk District. Approximately 10,000 artifacts spanning years of football history fill two of the three rooms in Lee’s unit. Each tells an interesting story, but some stand out. 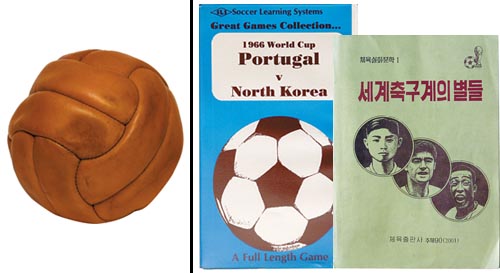 Left: A football used by the North Korean players for practice at the 1966 World Cup. Righ: A videotape of the 1966 quarterfinals match between North Korea and Portugal and a North Korean book on football greats like Pele and Diego Maradona.

One of these especially eye-catching pieces is a ticket stub from the 1966 World Cup quarterfinals match between North Korea and Portugal. The venue, “Goodison Park, Liverpool” and date, “Saturday, July 23” are printed on the face of the stub, but the name of the tournament is listed not as the World Cup but the “Jules Rimet Cup” - the tournament went by both names at the time.

The gold-plated sterling silver trophy was named in honor of former FIFA President Jules Rimet. In 1970, Brazil won the right to keep that cup permanently after winning the tournament for the third time. The name of the current trophy is the FIFA Cup.

Another intriguing artifact is the commemorative patch worn by Pak Doo-ik, who scored the winning goal in the 1-0 win over Italy in the round of 16 match at Ayresome Park, Middlesbrough, to a dinner to celebrate the North’s advance to the quarterfinals. Lee was curious as to how the patch, which bears Pak’s signature on the back, came to be in the possession of the English collector. The collector explained that Pak signed it and gave it to an English football official, and it passed among several collectors before he ended up with it.

The reason Pak gave it away - and likely also the reason so many of Lee Chang-myung’s teammates gave away their uniforms - lies in the “N. Korea” stenciled on it. At the time, that country preferred the name “Democratic People’s Republic of Korea,” or DPRK, and did not react favorably to being called North Korea. The national football team players asked the media at the 1966 World Cup to call them by the former name and even smudged out the letter “N” in front of Korea on the team bus. Park could not take the patch back home with him, and therefore gave it away as a goodwill gesture.

The football cleats worn by North Korean players in 1966 were also worth noting. The leather cleats have six metal studs, with those in the forefoot area reinforced by an extra layer of leather.

These cleat designs are unique to North Korea, according to several aging former football players. The North Korean economy was ahead of its southern neighbor until the late 1960s, and its football cleats were no different. The first football cleats produced in North Korea were made in the 1930s at Suseon Shoe Store in Pyongyang, and South Korea saw its first football cleats after 1945 brought liberation from Japanese colonial rule and former Suseon worker Noh Jong-young opened Sugyeong Sporting Goods Store in Seoul.

Lee’s fixation with collecting North Korean football memorabilia once won him an unwelcome extra: surveillance by national agents. He even met with National Intelligence Service agents on several occasions.

“I had to explain to the agents that I did not support the North Korean political system in any way. I merely liked North Korean football and collected memorabilia to retain a part of its history,” stated Lee. After the meeting, the agent actually helped Lee on several occasions.

As Lee explained to the agent, at the center of his efforts is the preservation of the past for future generations.

“In the distant future, when we reunite with North Korea, the time when the two Koreas competed on the football pitch will become nothing but a distant memory. It is important to preserve some of the records and memorabilia. It’s a way of continuing a part of our history,” explained Lee.

While on the surface, North Korea seems indifferent to its own sports mementos, South Korea is no different. Lee possesses the ball Ahn Jung-hwan used to score his golden goal at the 2002 World Cup round of 16 game, and the ball with which team captain Hong Myung-bo scored the winning penalty kick in a quarterfinals match against Spain in that same tournament.

Lee believes that it’s the small, everyday things - ticket stubs, jerseys and socks - that have the greatest power to connect people to a history they can’t possibly remember. And thanks to his efforts, these delicate objects will be around to tell their unique stories - of North and South Koreans vying on the football field - for generations to come.