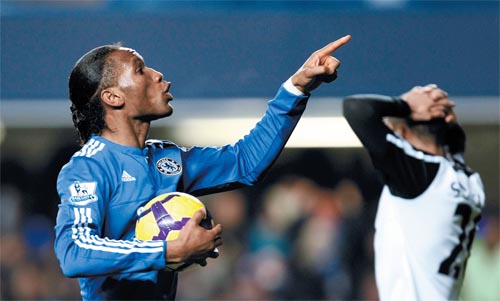 LONDON - Carlo Ancelotti’s tactical masterstroke helped Chelsea come from behind to beat Fulham 2-1 at Stamford Bridge here on Monday and so increase their lead at the top of the Premier League to five points.

The Italian manager introduced Branislav Ivanovic as a second half substitute and he crossed for Didier Drogba to head home in this west London derby to cancel out Zoltan Gera’s fourth minute opener for Fulham. Ancelotti also brought on Daniel Sturridge and he had a hand in Chelsea’s winning goal, which came just two minutes after Drogba’s 73rd minute equalizer.

Sturridge’s initial effort drew a save from Australian keeper Mark Schwarzer, but the ball eventually deflected in off Chris Smalling, making his first Premier League start, for a cruel own-goal.

Chelsea’s victory was watched by former Blues boss Jose Mourinho, now in charge of Inter Milan, ahead of the clubs’ Champions League clash.

Ancelotti included the Ivory Coast pair of Drogba and Salomon Kalou as well as Nigeria’s John Obi Mikel in his starting lineup for the last time before they head off to the African Nations Cup.

Ancelotti was granted special permission to allow the trio to delay their flights to Angola and it proved an important break for the Blues as they won for only the second time in eight matches.

Fulham, impressive at home, have not won in the league on their travels since the opening day of the season against basement club Portsmouth.

Cottagers manger Roy Hodgson was without Brede Hangeland after the Norway defender failed to recover from the knee injury he sustained in the warm-up against Tottenham last Saturday.

In his place, Hodgson brought in 20-year-old Smalling.

Yet it was the Chelsea defense who looked like novices as Gera gave visitors Fulham the lead. Paul Konchesky’s cross was not dealt with by the Chelsea back four and Gera was on hand to sweep the ball past Petr Cech.

Chelsea pressed for an equalizer but Fulham stood firm as Aaron Hughes and John Pantsil made two important challenges to deny Frank Lampard and Drogba.

Clint Dempsey provided Chelsea with a timely reminder in the 34th minute that Fulham were not going to sit back and defend their lead. The United States international produced a neat shot, which Cech did well to tip over the crossbar.

The Chelsea goalkeeper was called into action again inside the opening 90 seconds of the second half. Ricardo Carvalho’s back pass lacked pace and Bobby Zamora crept in only to plant his shot straight at Cech. Zamora’s missed opportunity seemed to spark Chelsea into life, as they upped the pressure on their near neighbors.

Fulham were forced to dig in as John Terry’s downward header came within a whisker of leveling the score. Kalou then surged down the left by his cross into the box evaded everyone in the penalty area before being hacked to safety by Pantsil.