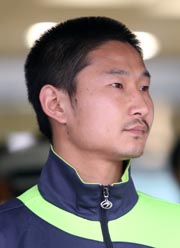 Lee Chun-soo, a former national football team member, is currently being shopped around by Saudi club Al-Nassr and may be released by his club, according to reports yesterday.

According to reports on the Arabic edition of Goal.com, a football news Web site, Lee’s club Al-Nassr of the Saudi Arabian League is also looking into loaning out the 28-year-old midfielder or releasing him if there are no interested clubs. The report said Al-Nassr intends to part ways with the midfielder due to his lagging play.

Lee did not part with Chunnam on favorable terms, releasing false statements about the transfer. At the time Lee claimed at the time that he did not have a choice and that it was Feyenoord’s decision to send him to Al-Nassr.

Chunnam demanded Lee pay 350 million won ($272,000) for breach of contract, but Lee again falsely claimed he did not agree to the terms of the deal and that IFA Sports Director Kim Min-jae had signed on his behalf. Chunnam eventually released the player, but since joining the Saudi club in July, Lee has failed to live up to expectations with just two goals.

Those close to Lee were quoted as saying they were unaware of the rumors and maintaining that he had not struggled this season.

“There is a high chance that the report is false. He recently injured his ribs and the club has been checking on his status on a daily basis and has asked him to play in the Jan. 1 match against Al-Hilal. It just does not make sense for the Al-Nassr to release Lee after these events,” said one of those close to Lee, according to Goal.com.

Lee began his professional career with promise, scoring seven goals for Ulsan Hyundai Horangi in 2002 and becoming the AFC Young Player of the Year. Although Lee has been proven an effective player in the K-League, he has failed in stints in Spain and the Netherlands.